Eminem's Back with The Re-Up 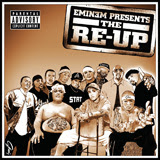 Okay, so Eminem Presents: The Re-Up is not a full-length album from Mr. Marshall Mathers, but it's damn close. He's featured on 7 tracks, and surprisingly the ones in-between are more than just filler. The remix of Akon's "Smack That" is better than the original, and newcomers Bobby Creek and Ca$his are featured on multiple tracks, as are labelmates 50 Cent, Lloyd Banks, D12, the late Proof, Obie Trice and Stat Quo. Whereas Kingdom Come was underwhelming, this mixtape (or is it a mixtape concept album?) came out of nowhere and provides some of the most refreshing hip-hop you're likely to hear this holiday season.

Standout tracks? "No Apologies" for one. This is Eminem like you haven't heard him since his acidic lyrics on The Marshall Mathers LP. He's been through a lot since his last album, and he vents it all here.

I'm also partial to "Re-Up," the album's title track. Every time 50 Cent and Eminem team up they bring out the best of each other so well that I wouldn't be surprised if they produce an entire album of these tracks in the future. They're also featured on the single, "You Don't Know" and "Jimmy Crack Corn."

While technically not an "album" in the traditional sense, this compilation is worth checking out for even the most casual Eminem fan.
Posted at 5:58 PM
Email ThisBlogThis!Share to TwitterShare to FacebookShare to Pinterest