A Necessary Pilgrimage to the Alma Mater 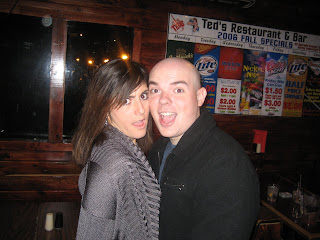 Sometimes, ya just need to pack up, leave town, and reconnect with some old friends. That's exactly what I did this weekend on a trip to UConn to celebrate, among other things, my good friend Taryn's completion of the LSATs. Pictured at right, I think she had an awesome time. I did too, even though celebrating early also means being totally drained of all energy by 10 p.m. I was "that guy" falling asleep on the couch next to the black light. At least we got to reap the benefits of Chinese food at 2 a.m. Egg rolls FTW.
The two hour drive there and back gave me some much-needed alone time, and also gave me a chance to listen to some music that I've been meaning to check out. I'll admit it—Kingdom Come is not terrible. I obtained a copy of Jay-Z's "comeback" CD a few days ago, and while it doesn't totally suck it didn't blow either...my mind, that is.

The thing about Jay-Z is that he's showed us how talented he can be, yet he seems to be slumming it here in choosing to rap about how successful he is. Thus, he sounds like every other rapper out there right now. Where's the stirring self-reflection that was present in "Moment of Clarity" on The Black Album? Where's the raw energy from Reasonable Doubt? Jay-Z is supposed to transcend the genre and take it to new levels, which he's done in the past. On this new disc, he's just sorta stale. Keep in mind that mediocre Jay-Z is better than most of what's considered "talent" in hip-hop right now. I have to say, his song with Chris Martin, "Beach Chair" is really good. It's worth an iTunes download.
So in closing, it was a great weekend. Thanks to everyone that made it awesome.
Posted at 11:06 PM
Email ThisBlogThis!Share to TwitterShare to FacebookShare to Pinterest