They Call Me N00b St0mper 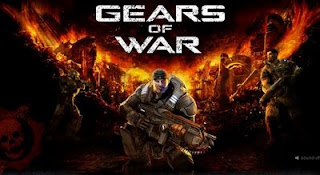 While many in the gaming industry were watching the console war between Sony and Nintendo escalate to muggings and even shootings as fans waited online for the coveted systems this holiday season, Microsoft fans have truly come out on top. The system ended up in the sweaty hands of many a gamer this month largely thanks to the release of one monumental game: Gears of War.

Sure, it's no Halo 3, but in many ways this is a good thing. The game is gritty and immersive, forcing players to survey their surroundings for cover while battling the Locust (underground monsters waging war on humanity, but that's not important right now). The graphics are fantastic, particularly if you are in possession of a high-definition TV. Like many gamers, I spent a good portion of my Christmas making full use of the chainsaw bayonet as I cut monsters in half with gory results, much to the dismay of any family members who happened to glance at the television. I completed the campaign (on the "casual" difficulty setting, I'm not trying to be a badass here), and I plan on playing through it again to unlock additional achievements.

Wait a minute, what are achievements? I'm glad you asked, and if you didn't I'm going to explain them anyway. They're basically statistics to let other players know just how awesome you really are. It also gives them the right to call you a "n00b" and back it up with cold, hard fact. Yes, I said n00b. All because I'm white and nerdy.

I also started up my Xbox Live account, which is surprising. I can't believe I got by as a gamer without the ability to talk trash with an 11 year old across the country. I'm the n00b st0mper. I st0mp n00bs. You wish that was your gamertag.
Speaking of trash-talking kids, how come they all sound about 8-years-old on Live? Getting frag-tagged in Gears is humiliating enough. It's even worse when your assailant was born at the tail-end of the Clinton administration.
Posted at 12:34 AM
Email ThisBlogThis!Share to TwitterShare to FacebookShare to Pinterest