...you must be the other guy. Yes, folks. After months of suggestions, taunting and hate mail, I have finally...FINALLY...seen The Departed. Fortunately, I made up for lost time by watching it three times last week all before it took home, among others, "Best Picture" and "Best Director" gold at The Oscars, or as I like to call it: The Night Hollywood Blows Itself (TNHBI for short).

I kid, I kid. I'm happy Scorcese got the recognition he so sorely deserved, even though the majority of the night was a vacuous display of narcissism. Much like most blogs, but I digress...ahem.

What I really enjoy about The Departed is its rewatchability. I've caught new things each time I've watched it, and each time I learn new catch-phrases that I can blurt out randomly during the course of my day. "Maybe yes, maybe no, maybe f*ck yourself" has quite the ring to it, especially when they ask if I want sugar in my coffee at Dunkin Donuts. Sorry donut ladies. Blame Marky Mark....He and the Funky Bunch will send a letter of apology in due time.

In literary news, I've just jumped into the Stephen King library, starting off with The Shining and working my way to obscurity from there. I have to admit, it takes a while to get used to his writing and the way he lays things out very slowly. I remember being frustrated with this when I read Pet Sematary some time ago. But hey, the guy is good at what he does, and he establishes mood pretty well. I want to jump into his Dark Tower series as soon as I make my way through the bulk of his "must-read" titles, and I have quite a bit more pages to turn to get to that point.

Gaming has cooled off due to that pesky thing known as a social life. You might have one. I know I'm going to dust off my Xbox 360 headphones, pop in Gears of War and chainsaw some noobs one of these nights, but it may take a while. Until then, tears will be rolling down many a pixelated cheek while legions of Wortmaniacs await the return of the N00b St0mper.
Posted at 10:49 PM No comments: Links to this post
Email ThisBlogThis!Share to TwitterShare to FacebookShare to Pinterest 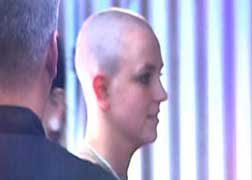 Well, it's official: The once-reigning princess of pop has gone way over the deep end. While there is a silver lining here, in that the media finally has something else to latch on to that isn't the ongoing Anna Nicole Smith saga, it also makes the 16-year-old me weep. Like most young men growing up in the 90s, I had a huge crush on her. Now, she's crushing us with every night-club freakout, new tattoo and impromptu prison haircut.

Don't get me wrong, the shaved head look is awesome on the right person. On me, for example (wink wink). But Brit, come on. When you got rid of K-Fed, we rejoiced. Now look at you. You're years away from a worthwhile comeback at this point, and your shenanigans aren't helping matters. Aside from your career, you do realize that there are two kids thrown into the mix, right?

And since the game takes place in Greece, it's got me all amped up for the upcoming 300, brought to us by Frank Miller (Sin City, The Dark Knight Returns) and Zack Snyder (Dawn of the Dead). I recently picked up the 300 graphic novel (of course I did, it's Frank Miller and I'm a whore), and the movie should be, like Sin City before it, a bloody good time. Pun absolutely intended.
Posted at 8:04 PM 1 comment: Links to this post
Email ThisBlogThis!Share to TwitterShare to FacebookShare to Pinterest 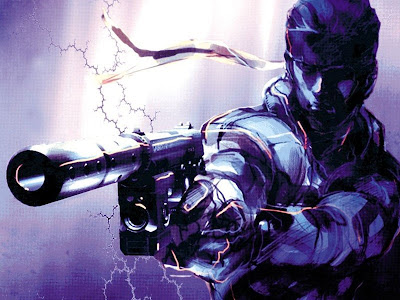 Hey, I've got a great idea! Let's take a cinematic video game series like...oh, I don't know...Metal Gear Solid, take the interactivity out of it, and cut an 8 hour storyline into about an hour and a half. And see if Michael Bay is available, he's good at explosions!

Oops, looks like Sony Pictures stole my surefire million dollar idea by announcing a live-action movie version of Metal Gear Solid. This is an interesting bit of news, seeing as how there's been speculation as to whether Metal Gear Solid 4: Guns of the Patriots, will be multiplatform or a Playstation 3 exclusive. If this deal works out between Sony and Konami, none of us will be able rack up those Xbox Live achievements with our old pal Solid Snake. Ah well, we'll all be able to see the movie, right? And we all know that video game movies are guaranteed blockbusters, right?

In case you can't detect my sarcasm there, blogosphere, this is horrible news. First off, as a rule, video game movies are always...ALWAYS bastardized versions of the source material. Take a look at Super Mario Bros., Resident Evil, Doom and the list goes on. The other reason a Metal Gear movie just doesn't make sense is that the games are pretty much movies already. Sure, there's a lot of gameplay mixed in there, but the games are laid out like interactive action films with some stylish visuals during the extensive cinematics. What's the point of making a movie if all it does is dilute the premise?

The linked article also mentions a World of Warcraft film being in the works over at Warner Bros. Wow, a rich fantasy world inspired by J.R.R. Tolkien.... what a brilliant and original idea. Think that'd work on-screen? Idiots.
Posted at 10:10 PM No comments: Links to this post
Email ThisBlogThis!Share to TwitterShare to FacebookShare to Pinterest
Labels: Movies, Video Games

No Time for Love, Doctor Jones! 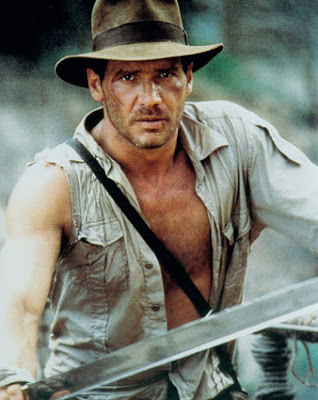 Box Office Mojo is reporting that everyone's favorite archaeologist/ophidiophobe (look it up) is making his way to the big screen much sooner than we all thought. The site lists Indiana Jones IV as having a May 22, 2008 release date. Interesting news, seeing how Steven Spielberg and George Lucas just agreed on a script fairly recently.

CHUD (Cinematic Happenings Under Development) is confident that this release date is legitimate, citing a source at spielbergfilms.com.

There are a lot of crazy rumors flying around the Interweb regarding this film, most recently that Indy's whip is going to be computer animated due to safety reasons. I'd take these all with a grain of salt. The combination of Harrison, George, and Steven hasn't let us down in the past and I think we should all have a little faith. It's taken forever to get this project rolling, and now that it's picking up momentum next summer can't come fast enough. They have top men working on it....top....men. And if you didn't catch that Raiders reference, then why are you still reading?

You'll notice that I've made zero comments about Ford's age. To me, as long as the film acknowledges that Indy's older and doesn't have him doing CGI cartwheels while fighting kung-fu Nazis, the film should work.
But what do I know? I once got lost in my own museum.
Posted at 10:19 PM No comments: Links to this post
Email ThisBlogThis!Share to TwitterShare to FacebookShare to Pinterest

They Came, They Saw, and they're Kickin' Ass Again! 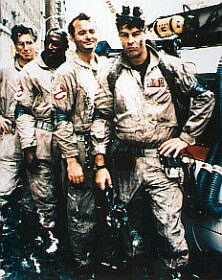 Dan Aykroyd has confirmed that a third Ghostbusters movie is going to happen after years of delays and speculations. You can read about the whole story here.

Personally, this is great news. I always felt that there was so much more that could be done with the Ghostbusters brand and if it needs to be completely CGI, then so be it. It looks like they're going with Aykroyd's "Ghostbusters in Hell" concept from back in the day, and if that's the case then they can really go nuts with the ghost designs. The only other alternative to a CGI sequel would be if they had the original guys retiring and training a group of newbies, but this idea is just as good. However, like anything, it's all about the execution. Because remember, what people really loved about the original film was the writing, so it all hinges on that. I'll be following this as it develops.
Posted at 2:24 PM 2 comments: Links to this post
Email ThisBlogThis!Share to TwitterShare to FacebookShare to Pinterest 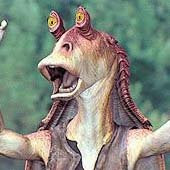 Ahmed Best, who was the voice actor and on-set stand-in for Star Wars character Jar Jar Binks in the prequel films was recently quoted in Empire magazine defending the CGI character that many fans and casual filmgoers revile to this day. In the article, Best says, "I have nothing but love for Jar-Jar. He was film history. He helped pave the way for Gollum and King Kong. I think in time Jar-Jar will be seen as a film pioneer."

Well, he's half right. Jar Jar was a technical achievement for his time, but to call him a "film pioneer?" Please. The reason why people appreciated Gollum and King Kong so much is that they were the exact opposite approach to Lucas' cartoon come-to-sickening-life. Gollum in particular felt like an organic part of the movie and helped usher in what many refer to as "digital acting." That is, it was CGI meant to mimic a real actor, not to distract the audience from the piss-poor dialogue. I'm a Star Wars fan but come on. Lucas has a tin ear for the English language, which is bound to happen when the only word he's heard for the last few years is "yes."

As for Ahmed, I kind of feel bad for the guy. If someone were to tell me that I was going to be the Chewbacca for a new trilogy of Star Wars films, I would be ecstatic. And he seems genuine enough in the documentary footage from the Episode 1 DVD. Then came the backlash, then the scaling back of the character to the point where he only appeared for a combined 4 seconds at most in the final film. The guy probably gets mountains of hate mail, all for doing exactly what he was told to do. It may have helped ruin the saga, but still.