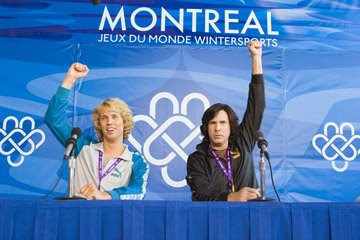 Blades of Glory had the potential to be a one-note joke. Skating rivals banned from singles competition decide to compete as the first male figure-skating team. Shenanigans ensue. Luckily, this movie was anything but that, thanks to a surprising supporting cast and its utilization of Will Ferrell and Jon Heder's respective talents.

Don't get me wrong, I think Ferrell is fantastic at playing roles such as these...when it's done right. Anchorman, for example. However we all saw Talladega Nights last summer, in which Ferrell came dangerously close to stale and irritating when his character is given nothing to do after the first 15 minutes of the movie.

In this film, Ferrell does what he does best consistently throughout. There's just something about his delivery of lines such as "I'm the FACE of figure skating!" that people can't help but love. Maybe it's because of his earnest, deadpan way of playing these characters. We buy that these guys actually take what they're saying seriously.

It doesn't hurt that just about everyone in the film pulls their weight. Amy Poehler and Will Arnett were great as Fairchild and Stranz Van Waldenberg, Jimmy and Chazz's skating rivals. They didn't fall into the "unfunny comedy villain that tries to steal scenes but fails miserably" that plagues a lot of movies like this. The movie also has Jenna Fischer (Pam from The Office) as their little sister Katie. By the way, there's a scene of Jenna in lingerie, and I think I seriously have a crush on her now. Ahem.

If you've seen the commercials and thought "well that looks stupid," you're pretty much right. And that's why you should see it. It's not a "smart" comedy by any means, but it's absurd and quirky enough to deserve your ten bucks.
Posted at 4:16 PM
Email ThisBlogThis!Share to TwitterShare to FacebookShare to Pinterest