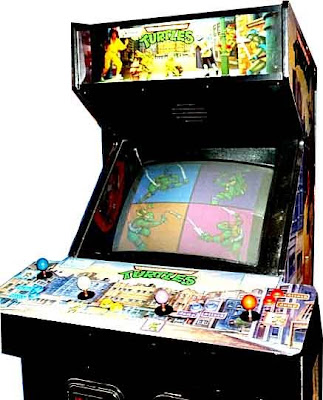 Like just about every child of the 80s, I'm currently in the midst of a wave of nostalgia this weekend, all because four anthropomorphic amphibians named after Renaissance painters decided to make their return to the silver screen.

If you're completely lost right now, I'm referring to the new Teenage Mutant Ninja Turtles movie, TMNT. While the abbreviation may just be a reflection to our acronym-saddled vocabulary (for example, hit me up on AIM so we can LOL at some NSFW PDFs. I'll ttyl), the name of the film may be attributed to the fact that the turtles in question are no longer teenagers, and Twentysomething Mutant Ninja Turtles just doesn't have the same ring and might be difficult to fit on action figure packaging.

Alas, I've yet to see the film (and when I do, you'll know). Instead, I'd like to talk about a little gem that I discovered on XBox Live Arcade this past week. The turtles were never just a cartoon or a comic book or a line of toys. They were an all-encompassing part of kid-dom in the early 90s. We wore the shirts, played with the toys, ate the cereal (and the cream pies), read the comics (well, I was one of the only kids I knew who actually read the more "mature" early stuff by Kevin Eastman and Peter Laird on which everything was based), went to see the movies, watched the cartoon, and even listened to their album from the Pizza Hut-sponsored live concerts. We did it all. And this certainly included video games, of which there were several. I have fond memories of spending countless quarters on the original Ninja Turtles arcade game, and would flock to it at every bowling alley or game room I could find. There was a home version, which was far more simplified and marketed as the sequel to the "holy crap this game is impossible" Nintendo original.

Today, manchildren like myself can hop on XBox Live and play a complete recreation of the original game, complete with its "Cowabunga" voice clips, pizza power-ups and button-mashing boss battles. It's a fun diversion to play through by yourself, despite the fact that you really can't lose since you basically have infinite "coins." The Xbox Live multiplayer, however, is where it's at. You can pick your turtle (Donatello's easily the best) and play through the game with 3 total strangers. You each have 19 lives, and the game generally takes about 30 minutes to breeze through (Shredder's a pain). What really shines here is the ability to talk to the other players, who generally seem to be enjoying themselves for a change. To see what I mean, fire up Gears of War and listen to the foul-mouthed racist 10 year-olds that yell at you when you "steal their kill."

The game's straight up fun. During my last run-through, we talked about all of the different facets of growing up a Turtle fan, ranging from "how cool was the sewer lair playset" to "how did Vanilla Ice end up in the second movie?" Fun and nostalgic? Count me in.