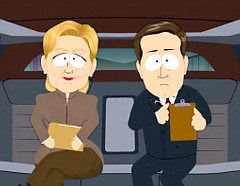 Bravo, Matt and Trey. The latest episode of South Park was easily the best since the boys took on World of Warcraft last fall. This week, the show spoofed Fox's 24 to a tee, complete with Cartman whispering urgently into a cell phone "for dramatic effect," real-time (well, half-real time) storytelling, and a send-up of one of 24's staples: the torture scene. Heck, they even included the camera zooms and the trademark clock sound effects before and after commercial breaks. Oh, and did I mention it centered around a bomb planted in Hillary Clinton's...er...lady parts? There's plenty of that in there too.

A lot of episodes recently have really emphasized this show's ability to juggle the absurd with the topical. Sure, the episodes aren't always gems (understandably, since the show's on an extremely tight production schedule). And to think, most people dismissed South Park as a fad when it came on the scene in 1997. Happy 10th, guys.
Posted at 10:43 PM
Email ThisBlogThis!Share to TwitterShare to FacebookShare to Pinterest