Gore, Guns, and Girls. Welcome to the Grindhouse 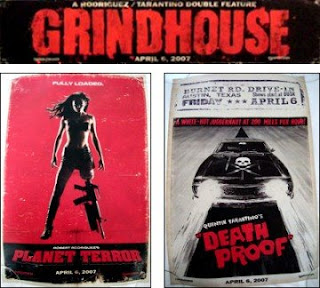 Expectations for Grindhouse were high, and expectedly so. The brainchild of Robert Rodriguez and Quentin Tarantino, this double feature intends to resurrect the long-dead era of low-budget exploitation flicks. It promised to be far more than a couple of films shown back-to-back, but rather a recreation of a nearly forgotten moviegoing experience. But does it deliver? Amazingly so.

It opens up with a fake trailer for Machete, a film about a day-laborer turned hitman. During my screening, half the audience was in hysterics throughout the trailer, while everyone else was left scratching their heads, wondering what the joke was. By the time Rodriguez' Planet Terror began to roll, complete with an apparently damaged film print, everyone seemed to be on the same page. "Bring on the crap! This is gonna be fun."

Surprisingly enough, Planet Terror was actually good. Really good. The plot, which was just an excuse to unleash hordes of zombies (or zombie-like creatures) on the main characters, won't be spoiled here. Needless to say, there's lots of gore, including testicles in a jar, limbs being torn off and exploding heads. Not once did it feel overlong, and by the time Rose McGowan's leg becomes a killing machine, you'll be wishing it went on for another 30 minutes or so.

Ah yes. Rose McGowan. She plays Cherry Darling, a go-go dancer (don't call her a stripper) who aspires to become a stand-up comedian. Not too long after her introduction, standing up becomes a problem for her after her leg is torn off by a group of zombies. El Wray (Freddy Rodriguez) is her ex-boyfriend with the perfect solution to her problem: a machine gun prosthetic leg. Ass-kicking ensues.

You know, I've never really noticed Rose McGowan before, but I'm definitely keeping an eye on her from now on. She's hotter than hot. Gun-leg or not.

After Planet Terror, the audience is treated to three more faux trailers: Werewolf Women of the S.S., Don't! and Thanksgiving, directed by Rob Zombie, Edgar Wright and Eli Roth respectively. I wasn't much of a fan of Roth after seeing Hostel, but I wouldn't mind it if his trailer became a feature-length horror spoof one of these days. Grindhouse 2 anyone?

Then there's Death Proof. This one is hard to write about, since it's sadly Tarantino's weakest effort. It's not that it's terrible, it just thinks it's way better than it is. while Rodriguez's film used the "grindhouse" format to bring us a schlocky, fun roller-coaster ride, Death Proof seems to be just another "Tarantino Homage" picture.

It's disappointing, since there's lots of great potential with the material Tarantino is working with. You have Stuntman Mike (Kurt Russell) stalking these young girls before mowing them down with his "death proof" stunt car, complete with some of the coolest car chases you're likely to see anytime soon. But before and in between the good stuff you have a lot of talky dialogue to get through. I love good dialogue, and Tarantino is usually great at it. Here, it's an annoyance. The two groups of girls in Death Proof are never given anything interesting to say, yet they insist on spending 75% of the movie saying it. It's just yammering, and it's unnecessary.

But when things get going, they get going. Zoë Bell (playing herself) is a stunt goddess. I won't spoil the scene for those who haven't seen the film, but I applaud her work toward the end of the film. It's cheer-inducing.

Despite these gripes, Grindhouse is a consistent good time. While I must say that Planet Terror is far more satisfying than Death Proof, a fan of B-movies would be well-advised to check them both out in theaters while you still can.
Posted at 10:33 PM
Email ThisBlogThis!Share to TwitterShare to FacebookShare to Pinterest
Labels: Movies, Wort Report Review