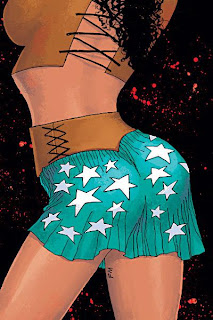 After reading through the fifth issue of All-Star Batman & Robin:The Boy Wonder it becomes readily apparent that Frank Miller, who reignited interest in the character in the mid-80s, really hates Batman. Despises him, even.

His past takes on the character, including The Dark Knight Returns and Batman: Year One were gritty and necessarily bleak: this is Batman after all. Miller's Batman was a far cry from that of the campy 1960s television version, and proved to the world that the Caped Crusader could be taken seriously when handled by the right people.

Here we are in 2007 and Miller is once again penning a Batman tale, with famed comic artist Jim Lee providing the visuals. With an unpredictable release schedule (it's been hitting stands sporadically for nearly two years now), Boy Wonder is an out-of-continuity retelling of Robin's origins.

From its beginnings, the characterization of Batman in this series has been a bit off. Batman refers to himself as "the goddamn Batman," kills cops and generally comes off as a psychopath (for a guy that dresses up like a bat). He's less a hero and more of a deviant that gets off from beating the snot out of purse-snatchers. It just doesn't add up.

In this issue, Miller gives us some insight into Wonder Woman's psyche. Namely, the fact that she despises men. "Men always lie about everything. Men always make a mess out of everything." She then makes out with Superman, only after he knocks her ass down with his superbreath. She's got issues. But then again, this is Frank Miller. Everyone's got 'em.

And that's the problem. Miller injects so much of this "gritty realism" into these iconic characters that they fail to be icons at this point. They're just whackos in costumes, wearing masks and harboring secret identities to conceal their inner torment.

Perhaps Miller needs to take a break from the superhero game and focus on his original material, such as Sin City. While his previous work succeeded at subverting the superhero genre and made it relevant again, his current Batman effort borders on self-parody.
Posted at 10:07 PM
Email ThisBlogThis!Share to TwitterShare to FacebookShare to Pinterest
Labels: Comics