And It's Not a Sequel! 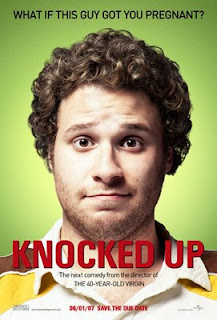 Most of you have probably seen Judd Apatow's Knocked Up, but for the five of you living under the proverbial rock, it's definitely worth seeing. It's non-stop hilarity, and I'm not just saying that in a "cheesy sound byte commercial voice-over" way. It's really good, and I daresay it's even better than The 40-Year-Old Virgin, and that's saying a lot.
You see, Apatow is not out to make the over-the-top frat comedies that were so commonplace in the late 90's. Knocked Up, like Virgin before it, is a refreshing take on the "rite of passage" film, complete with ::gasp:: heart. Here, with Seth Rogen and Katherine Heigl as the leading mismatched couple, there's a sense that these characters truly want to make this relationship work, and the situations that they end up in arise organically within the context of their journey and don't necessarily feel tacked on for the sake of a comedy set-piece.

Of course, this film is full of comedy set-pieces, largely thanks to the strong supporting cast including Paul Rudd, Leslie Mann, Jonah Hill and even Harold Ramis. Anything I say would spoil the movie for the handful of people who, in all honesty, have no real reason not to have seen this already. Like I said, it's that good. Audiences would be wise to keep their eye on Seth Rogen. We're gonna be seeing a lot of him after his uproarious star-turn here.

So I'd like to thank Judd Apatow, not only for providing the best non-sequel of the summer, but for creating one of the best comedies we've seen in years.
Posted at 8:32 PM
Email ThisBlogThis!Share to TwitterShare to FacebookShare to Pinterest
Labels: Movies, Wort Report Review