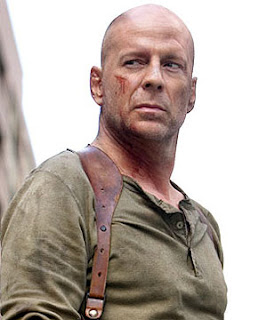 Like most people who grew up in the 80's, I'm really looking forward to this Wednesday's Live Free or Die Hard, the fourth installment of the Bruce Willis action series. A lot of people, particularly the talkbackers over at Ain't It Cool News, have been pissing and moaning about the film's PG-13 rating, a move by the studio to ensure a bigger opening in a summer movie season clogged with blockbuster sequels and remakes.

Now, one of the things that has endeared moviegoers to the Die Hard franchise in the past is its R-rated depiction of brutal desperation. John McClane, the series' protagonist, is a flawed New York (and occasional LA) police officer who gets placed in these really unfortunate situations which force him to be a hero. And part of what made the character (and the situations) believable was the language and the violence.

Now, I don't need gallons of blood or a smattering of F-bombs to enjoy a movie, but toning down the film's rating is also taming John McClane as a character. The word "motherf*cker" MUST follow his "yippee ki yay" catchphrase. While the final two movies used it as more of a "witty thing to say when he blows up the bad guys at the end," the phrase was the ultimate "screw you" to the first film's villain, Hans Gruber (Alan Rickman). He was a villain who had planned out every concievable obstacle in his scheme to rob the Nakatomi corporation dry, and here was this American who "watched too many movies as a child," running around like John Wayne and systematically killing his men. He's a foul-mouthed fly in the ointment, a tradition carried on in both Die Harder and Die Hard With A Vengeance.

According to some early reviews, the film may be in danger of becoming the typical big-budget action film: tame and overblown, with the kind of unrealistic set pieces reserved these days for superheroes. Perhaps an R-rated cut will be released on DVD in a few months, but we may be stuck with "McClane lite" until then.

Nevertheless, I have faith in Bruce Willis, and am anxiously awaiting its June 27th release date.
Posted at 8:34 PM
Email ThisBlogThis!Share to TwitterShare to FacebookShare to Pinterest