Transform and Roll Out! 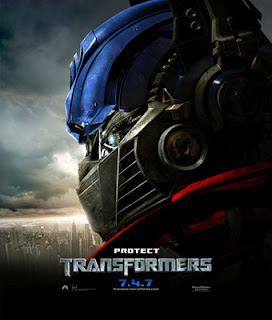 I'm diggin' the love that Optimus Prime and the gang have been getting over the past week and a half. It seems that despite some mixed reviews and the general air of skepticism surrounding the release of the film, Michael Bay's Transformers has grossed over $186 million domestically since its July 3rd release, gunning for $300 million worldwide. Not bad for a movie based on action figures.

But what is the reason for this success? All popcorn-greased fingers point to the fact that people genuinely enjoy having fun at the movies. While most blockbusters these days are bogged down by droopy-eyed mopiness (Spider-Man 3) and bloat (Pirates of the Caribbean: At World's End), Bay's Transformers moved along at a brisk pace, introduced us to some colorful characters and blew our minds with impressive visuals.

It's safe to say that this summer has turned itself around, with the solid Knocked Up, Live Free or Die Hard, Ratatoille and now this. Will Harry Potter and the Order of the Phoenix be another passenger on the late-arriving Summer-of-Not-Suck Express? Stay tuned.
Posted at 8:35 PM
Email ThisBlogThis!Share to TwitterShare to FacebookShare to Pinterest