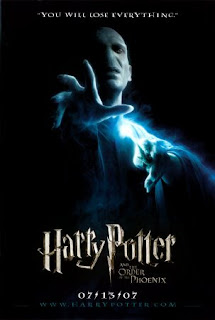 It's a good week for Harry Potter, the bespectacled boy wizard created by J.K. Rowling. With a hit movie topping the box office and a new book that's selling like, well, a Harry Potter novel, kids and adults alike have become, dare I say it, enchanted.

I managed to catch the new film, Harry Potter and the Order of the Phoenix this week. It was the first time I would be seeing a Harry Potter film after reading the book, so I knew I'd be looking for each and every deviance from the original story. And boy, are there deviances. But this isn't always a bad thing. I'd even venture to say that Order of the Phoenix is the second best Potter film after Alfonso Cuaron's brilliant version of Harry Potter and the Prisoner of Azkaban.

I wasn't always a fan of the books or the movies, I should mention. It always felt like something I just didn't get, despite being enamored with just about every fantasy property known to man. The movies were entertaining as kiddie-fair, but the first two books were pretty underwhelming for me at first. I didn't understand the adult fascination in the series until I dove into the rest of the books. Around halfway through Harry Potter and the Goblet of Fire, I found myself truly caring about the characters and the world that Rowling had created. With each book she raises the stakes and further develops her mythology. I've since garnered a far greater appreciation for both incarnations of the series, and can find merit by looking at them as both an adult with a strong literary education and as a child who just happens to be 23 years old.

The film version of Order of the Phoenix is basically a Cliff's Notes version of the book. It's a highlight reel, which both adds and detracts from the narrative. At this point in the series, Rowling was in dire need of a better editor, with the stories running a bit long and rambling in places. However, I kind of missed a lot of the rambling on film. There's no real way to remedy that, save for making the film far longer. It complemented the book nicely; I just don't think the uninitiated (let's call them Muggles in this context) would appreciate the scope of the story.

Performances were a lot better this time around from the three principals: Daniel Radcliffe, Rupert Grint and Emma Watson as Harry, Ron Weasley and Hermione Granger. You can tell that these young actors, who have grown up together on-film, have also grown into their characters. Director David Yates, although a relative novice director, coaxed strong performances out of everyone involved. Welcome new additions were Imelda Staunton as Dolores Umbridge and Helena Bonham Carter as Bellatrix Lestrange.

If you're a Potter fan, you already know the story and will have a lot of fun seeing it on the big screen (IMAX, if it's available). You might be miffed about the deletions, but everything included is well done. It's one of the best Harry Potters yet, and is by far the most exciting. Now, if you'll excuse me, I've got to finish reading Harry Potter and the Deathly Hallows. Here's a spoiler: