The Simpsons Movie: Worth the Wait? 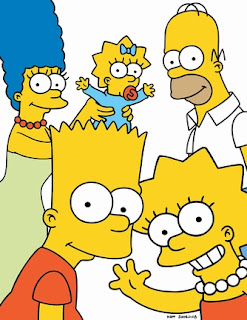 After nearly two decades on television, everyone's favorite yellow family has made its way to the big-screen, and I can safely say, as a longtime fan of the series, that The Simpsons Movie lives up to any and all expectations.

You see, I'm hardly what one would call a "casual" fan of The Simpsons. I own the first 8 seasons on DVD, an expansive collection of the merchandise, and way too many of the t-shirts. Needless to say, I was amped (and concerned) when they announced that a movie was finally on the way.

Allow me to explain my skepticism. While there's a decent new episode on TV now and then, the show hasn't been anywhere near the quality of its glory days: Seasons 4 through 8. I figured that, while it was going to be great to see these characters I've known nearly all of my life grace the big screen at the local multiplex, I was ready for a bittersweet realization that they should have done this film years ago.
My concerns melted away like rich creamery butter (mmmm...butter) just moments into the flick. The writers have managed to bring back the former charm of the series, pelting the audience with rapid-fire gags and one-liners. It's far more consistent than, say, other toon-to-film transitions such as South Park: Bigger Longer and Uncut.
A plot summary is useless for a movie like this, so I'll just let you know that Homer does something incredibly stupid and puts the entire town in danger. It's up to him, Marge, Lisa, Bart and Maggie to set things right. That's the basic framework, and all you really need to know at this point.

You'll see your favorite supporting characters, with memorable contributions from Ralph Wiggum, Mr. Burns, Otto, Comic Book Guy, Kent Brockman and countless others. There's a new villain from the Environmental Protection Agency voiced by series favorite Albert Brooks, who played Hank Scorpio in the episode "You Only Move Twice." He's basically "Scorpio Lite" here, but he's a good villain with some choice dialogue.
While some choice moments have been shown in commercials and trailers, such as "Spider-Pig" and Bart's nude skateboarding, but rest assured: there are plenty of surprises. The film takes advantage of its PG-13 rating, I'll say that much.

There's really no reason not to love The Simpsons Movie. Chances are, you've seen and like the show, and if you haven't: what's it like living under that boulder? Should I say it? I'll say it. Best. Movie. Of. The. Summer.
Posted at 10:49 PM
Email ThisBlogThis!Share to TwitterShare to FacebookShare to Pinterest
Labels: The Simpsons, Wort Report Review

I thought the movie was a little short. Comment?

Haha, Ok Mike. The movie's a little under 90 minutes, and I commented Friday night that it could have been longer. I could have gone for another 20 minutes, but when a movie leaves you wanting more and not less, that can't be a bad thing, can it?