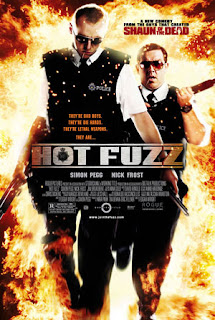 Hot Fuzz, the cop movie parody from the guys that brought you Shaun of the Dead, arrived on DVD this week, and is worth picking up whether you caught it during its theatrical run or not. Like its predecessor, it demands repeat viewings.

The film tells the story of London cop Nicholas Angel (Simon Pegg) who is promoted to sergeant with one catch: he's being transferred to a small country town, Sandford, because he's making everyone on the force "look bad." As it turns out, the small town is hardly what it seems on the outside. Teamed up with the oafish Danny (Nick Frost), Angel has to get to the bottom of a string of suspicious murders while Danny teaches him the finer art of jumping through the air while firing two guns at once.

I say that because this film, while primarily about a city cop trying to cope with policing a small town, is a send-up of big-budget cop films like Point Break and Bad Boys 2. While Shaun spoofed the zombie films of George Romero, Hot Fuzz takes pot shots at Michael Bay. And it works.

Alas, it's just not as good as Shaun , at least not during the first viewing. When watching it again, you'll noticed how layered the film is, and how every character and every situation pays off later. Shaun similarly gets more enjoyable each time you see it, but Hot Fuzz lacks that "wow, this is brilliant" charm on first viewing of its predecessor. It's very good, but fans of Shaun of the Dead may be disappointed at first. If this is the case, watch it again. And then 3 or 4 more times just for fun.

If you like British comedy with some gunfire and explosions thrown in, you'll love Hot Fuzz.
Posted at 2:40 PM
Email ThisBlogThis!Share to TwitterShare to FacebookShare to Pinterest