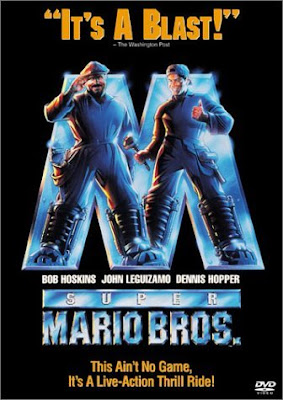 Remember the Super Mario Bros. movie? The one that featured Bob Hoskins and John Leguizamo as everyone's favorite Italian plumbers? Remember how it had nothing to do with the video games and blew consistently and thoroughly?

If you answered no, I envy you. I mean really, look at that poster above, with the quote "It's a blast!" from The Washington Post. I'm fairly confident that the rest of the quote reads "...in the face with a loaded shotgun."

Arguably, this cinematic bowel movement was the first in a long, long line of horrible video game-to-movie adaptations. The only watchable one? The first Tomb Raider. Only because it featured a lithe Angelina Jolie and her two co-stars. I'm talking about her breasts. But you knew that.
As for Super Mario Bros., just how did so many good actors get roped into this thing? Bob Hoskins? Dennis Hopper? John Leguizamo? Well, that last one was a clown in a fat suit a few years later in the detestable Spawn movie, so he doesn't necessarily count in this case. But seriously, what the hell? The movie had something to do with a meteor and some snot fungus. Oh, and everyone ate fried lizards. Everything that made the games great, right?
Well, this rant all has to do with this article I came across from the UK's The Guardian, in which Hoskins refers to the film as a "f**king nightmare," and calls the husband-and-wife directors "f**king idiots." It's little things like this that just make my Sunday that much better. Check it out here.
Posted at 3:31 PM
Email ThisBlogThis!Share to TwitterShare to FacebookShare to Pinterest

I will always admit that the Super Mario Bros. movie is a quality, yes... quality film for kids. I loved it when I first saw it and it has always been a guilty pleasure. And this is coming from a guy who's favorite video game franchise is Mario Bros. Looking back it is campy with weak acting, but it was fun. Yes, I know it has little to do with the actual game, but so what! oh well, to each their own.

Looking back, it definitely has some camp value. The goombas and their tiny heads, The bob-omb, the lead-in for a sequel that never happened...It's got a lot of "WTF" factor, but I'm not sure that was the intention.

Or maybe I'm just bitter in my old age.