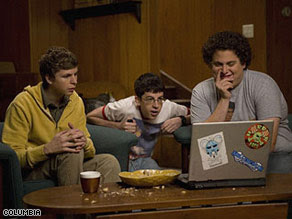 Superbad is one of those rare teen sex comedies that transcends its genre and truly captures what it's like to be a teenager on the cusp of high school graduation. That brief, three month period of adolescent invincibility that we all embrace before embarking on the journey to college and, with it, the unknown.

Superbad is produced by Judd Apatow, comedy's "go-to" guy at the moment, with directorial triumphs The 40-Year-Old Virgin and Knocked Up under his belt. Despite what Superbad's commercials would have you believe, Apatow didn't direct this one. Rather, it was helmed by Greg Mottola, a relative newcomer. Fear not. This film is hilarious and, in this writer's humble opinion, it trumps Knocked Up in terms of rapid-fire dialogue and pacing.

This movie was written by Knocked Up star Seth Rogen, who has been an Apatow fixture since Freaks and Geeks nearly a decade ago, and his friend Evan Goldberg when they were only thirteen years old. It shows. In a good way. It's a simple story of three high school losers trying to score booze, which in turn would secure their places in the pants of three lovely young ladies. The two main characters, Seth (Jonah Hill) and Evan (Michael Cera), are going to two different schools in a few months while their considerably dorky friend Fogell (Christopher Mitz-Plasse) is a 25-year-old Hawaiian organ donor who goes by the name of McLovin. Or so says his fake ID.

Rounding out the rest of the cast are Rogen and SNL's Bill Hader as two man-child police officers. I'm sure there's a lesson with these characters about growing up, but it may have been lost somewhere in-between the dick jokes. But it's there.

If it sounds like something you've seen before, that's because it most certainly is. Scoring booze and getting laid is at the center of just about every R-rated teen comedy ever made. What sets Superbad apart is how none of it feels glossy or manufactured. The characters talk and act the way real teenagers talk. There's no politically-correct filter here, which gives the film both its edge and its charm. This is probably why you haven't seen any of the best jokes in the trailers or television spots.

Superbad is a beer-soaked coming-of-age story propelled by its uproarious dialogue and its memorable characters. You'll be quoting it for days. Just don't do it in front of your grandmother.
Posted at 3:26 PM
Email ThisBlogThis!Share to TwitterShare to FacebookShare to Pinterest
Labels: Movies, Wort Report Review