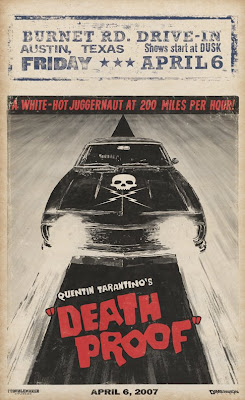 Remember that great idea Quentin Tarantino and Robert Rodriguez had a while back? Where they each made an homage to the schlocky trash cinema of yesteryear and presented it as a double feature, complete with fake movie trailers in between? Remember how cool it was to see Grindhouse in theaters last spring? Well, the heart of that project has been thoroughly yanked out in favor of separate DVD releases for each film. We're sorry you lost money on the theatrical run, Weinsteins. So I guess I'm paying twice for what is essentially one experience?

Tarantino's half of Grindhouse, Death Proof, came out on DVD today in a two-disc special edition. Exclusive to Best Buy is a special 3-disc set that comes in a nifty metal case. I opted for that one.
For those that remember, I wasn't too keen on Death Proof when it was in theaters. I thought it was talky, meandering and overall self-indulgent. But I think this dissatisfaction is owed more to the fact that Planet Terror, Rodriguez's zombie homage, was far superior. I doubt anything could top what was one of the most over-the-top action to hit the multiplex this year. Long story short, it was a tough act to follow.
The version of Death Proof released on DVD today is a bit longer than the theatrical version, and we do get more of Stuntman Mike (Kurt Russell), the villainous stunt driver who gets off on stalking and ramming into young girls in his "death proof" stunt car. For this, I am grateful. Stuntman Mike is far more interesting than the prattling heroines Tarantino focuses on.
But I've gotta say, this film is still very uneven. Both sets of girls in the film still spend far too long talking about obscure movies and music, serving no purpose but to stretch the film's running time. Yes, Mr. Tarantino. We're aware that you enjoy obscure movies and music from the 1970s, but you're spending film time on it and the audience is getting bored. Also, it's not character development if we're dealing with archetypes here. This is a "grindhouse" film, after all. Pointless dialogue sprinkled with "fuck" is still pointless.

But is it a fun movie? Yep. Is it pretty damned entertaining? Yep. Should you check it out? Yep, if only as a rental. Criticizing Tarantino for being talky is like criticizing Kevin Smith for dick jokes. You know what you're getting into from the get-go. Plus, there's all kinds of bonus features on there that we probably wouldn't get if the two halves of Grindhouse were released as a single set.

As much as I loved both films, I still object to the separate DVD releases... not to mention no plans for the spectacular "trailers." I have heard of a DVD package with both films and all trailers to be released "god knows when." Ha! I'm still waiting for the Kill Bill box set. My patience is waning Mr. Taratino!