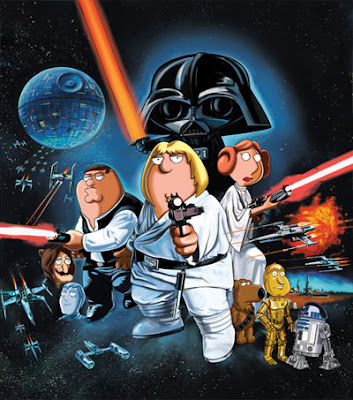 To commemorate the 30th anniversary of the original Star Wars film, Family Guy put together a one-hour tribute show, retelling the story using Family Guy characters. In many ways, it succeeded. Stewie as Darth Vader was pretty inspired, and many of the gags (such as putting a Bush/Cheney bumper sticker on an Imperial Star Destroyer) were spot-on.

But at the end of the hour, it became apparent that much of the show was spent mimicking the film as opposed to lampooning it. In many instances, entire sequences of dialogue were left unchanged from the movie, thus exposing Family Guy's main weakness as of late: it mistakes repetition for satire.

During one scene the creepy old pedophile Herbert, playing Obi-Wan Kenobi, sings an entire song from Dirty Dancing to Chris, playing Luke Skywalker. Okay, we got it a long time ago that Herbert has a thing for Chris. So for two whole minutes, there's no real joke, it's just "hey, that's from Dirty Dancing." I suppose it does let the writers, or manatees, as South Park suggested, breathe a bit. But I think I stand with a lot of Family Guy viewers in thinking that this character ran his course years ago. They ditched the lame vaudeville guys by actually having Stewie shoot them both onscreen. I think it's time we ditched Herbert in a similar fashion. But I digress.
There were other references too. Including a reference to National Lampoon's Vacation and, not one, but two references to Airplane. Granted, they were mildly amusing, but come on. The entire episode is a reference to a movie. You have an hour to make fun of Star Wars. You might want to make fun of it instead of ::insert word-for-word dialogue from another popular movie here::

And there's other laziness. The lightsaber-as-a-penis joke and a Grey Poupon reference (I think Tiny Toon Adventures cornered the market on that gag in the early 90's, guys) immediately come to mind. Now, mind you, these wouldn't have been so horrible if the jokes were as rapid-fire as they are during a regular episode. But whether it was pressure not to step on anyone's toes at Lucasfilm or the fact that they needed to cram the entire story into an hour, it just wasn't as funny as Family Guy usually is. And that's unfortunate, because this could have been one of the classic Star Wars spoofs. Instead it's more of a "hahaha, Brian is Chewbacca" sort of thing.

What I did like was the fact that Chris points out at the end of the episode that Robot Chicken already did a Star Wars episode. This sparks an argument between Chris (voiced by Robot Chicken creator Seth Green) and Peter (voiced by Family Guy creator Seth MacFarlane). It absolutely broke the fourth wall and was amusing to watch for fans of both shows...It's too bad the Robot Chicken special was a lot funnier.
Posted at 10:33 PM
Email ThisBlogThis!Share to TwitterShare to FacebookShare to Pinterest
Labels: Family Guy, Star Wars, Wort Report Review