It's after midnight, I'm unshaven (my entire head feels like a brillo pad) and I need a beer. That about sums up how I'm feeling right now. My workday kicked my ass and dragged me through the mud, and my night wasn't all that swell either. So I'm sipping a cold one, Blue Moon's seasonal "Harvest Moon," which features an interesting blend of pumpkin spice for that "holy crap, it's fall" feeling. Anyhoo, on to George Lucas. 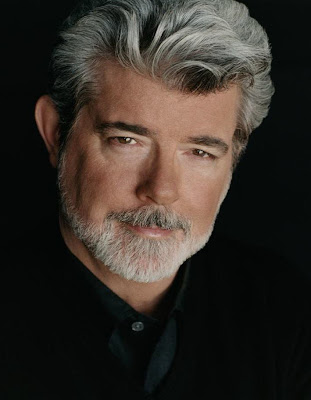 TV Guide scored an interview with the bearded one in which he describes Indiana Jones and the Kingdom of the Crystal Skull. But, in typical Lucas fashion, he tells us absolutely nothing. Am I on the edge of my seat? Sure I am. I'm a red-blooded geek who dressed as Obi-Wan Kenobi for three consecutive Halloweens. In high school. Of course I'm excited about this.

Lucas discusses the absence of Sean Connery as Indy's father and, while it sucks, I'm glad that they didn't shoe-horn him in at the expense of the story. That was one of my Star Wars prequel pet peeves. "Hey, it's Chewbacca! You remember him!" And so forth. But they have a strong cast thus far, and they seem to want to do this right.And it's also great to know that Connery is still honoring his Hollywood retirement and isn't reprising his role as Henry Jones for a cheap cameo and a not-so-cheap paycheck.


But check out the interview. Lucas talks a great deal about supporting indie (no pun intended) filmmakers. One forgets that before Lucas' millions of dollars in movie revenue and merchandising, he was a simple filmmaker working on a shoestring budget. Love him or hate him, you have to admire that.
Posted at 12:21 AM
Email ThisBlogThis!Share to TwitterShare to FacebookShare to Pinterest