I know that you've been biting your nails in anticipation of the Wort Report's take on the Britney Spears VMA performance. Really, if not for these hot button topics, how would we get through the monotony of everyday life? Hell, I know that I go into a complete and total meltdown if I don't know what Britney, Paris, Lindsay and to a lesser extent Nicole are doing on an everyday basis. If you can't tell, I'm being sarcastic. But that doesn't play all that well in print. I'm sorry. Really I am. That was sarcasm too. 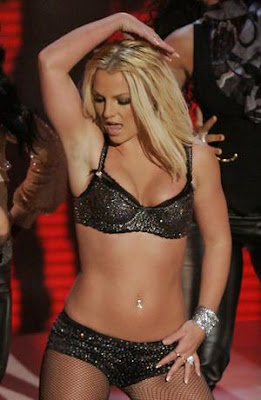 The first thing that a lot of the gossip rags (and most mainstream media, sadly) picked up on was her weight. I present to you exhibit A, to your left. As you can see, she doesn't look all too shabby considering what she's been through the past few months. She's nowhere near her "Toxic" days, but I doubt I'd kick her out of bed. Especially in that outfit.

Of course, as far as the performance went, I'm going to have to side with the majority. What. The. Hell. Don't big, multimillion dollar awards shows have choreographers and handlers to make sure the "artists" don't look coked up and confused? She just lip-synched for about five minutes while awkwardly meandering around a stage while dancers groped her. Or were they holding her up? I couldn't tell.

The sad thing about all this is that Britney really needed this. She just obviously wasn't prepared physically or mentally to perform in front of an audience of millions.

Or, turning that judgmental pendulum back the other way, would we have been happy if it were anything less than a trainwreck? I'd be willing to wager that Mtv was counting on this surge of Britney criticism, which I'll refer to as Briticism from now on. I mean, was there anything else worth talking about on that show last night? Really?

On a related note, I can guarantee that Christina Aguilera is laughing her ass off today. Hell, she's gonna be a mom. But I really just wanted to post this pic: 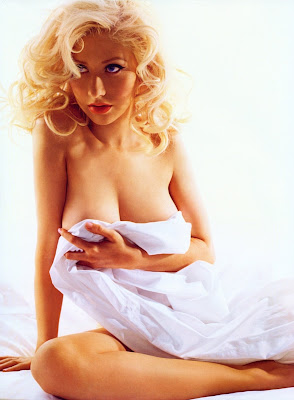 Sigh...
Posted at 8:21 PM
Email ThisBlogThis!Share to TwitterShare to FacebookShare to Pinterest

I was hoping to catch some attractive C-Section scars on her stomach... at least that's one thing makeup was able to hide.

The performance was a mess. A big fat mess. Her stomach recieved a bigger bounce than her career when she appeared on tv. Hopefully they can recycle Pavarotti's casket if needed.