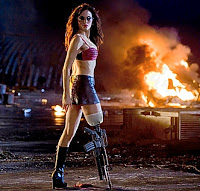 Planet Terror’s story is relatively simple. A military bio-weapon experiment results in a viral outbreak, turning hundreds of people into disfigured zombie-like creatures (or “sickos,” as one character calls them). We’re introduced to some colorful individuals, including one-man army El Wray (Freddy Rodriguez), barbecue aficionado J.T. (Jeff Fahey) and the sexy Dr. Dakota Block (Marley Shelton). You’ve also got genre favorites such as Bruce Willis, Michael Biehn (Aliens, Terminator) and Tom Savini (gore effects genius behind Dawn of the Dead) appearing in supporting roles. It’s a B-movie that’s completely aware of itself, but you’ll care about these characters and be surprised when you do.

Of course, if you’ve seen any of the promotional material for Planet Terror, you know that Rose McGowan is the real star, machine-gun leg and all. She plays Cherry Darling, a sarcastic go-go dancer with countless “useless” talents that come in handy throughout the film. Of course, she loses her leg when attacked by a group of “sickos” and is later equipped with an armor-piercing appendage, courtesy of ex-boyfriend El Wray. Sure, there’s explosions and blood spattering every which way, but I dare you to take your eyes off of Rose.

And that brings us to one of the main attractions of this film and just about anything else in the “grindhouse” genre, and that’s the bloodshed. It’s comically over-the-top here, and after the first few killings you’ll be immune to whatever gore this movie throws at you. That is, until Quentin Tarantino’s penis starts to melt in the final act. That’s just gross and wrong on all levels.

Special features on the bonus disc include all of the behind-the-scenes featurettes you’d expect from a Rodriguez release, similar to what he put together for the Sin City double disc. If any director makes you feel like a film student just by watching his DVDs, it’s Robert Rodriguez.

While it may be wise to wait for the inevitable “theatrical cut” of Grindhouse, featuring Planet Terror and Death Proof on one disc complete with the fake movie trailers shown in theaters, Planet Terror is a fine film in its own right. It’s a solid addition to any collection.
Posted at 1:39 PM
Email ThisBlogThis!Share to TwitterShare to FacebookShare to Pinterest
Labels: DVD, Movies, Wort Report Review