Robots in Disguise and on DVD 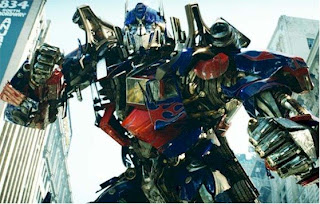 The two-disc special edition of Transformers hit store shelves this week and is a definite buy. Love him or hate him, Michael Bay (The Rock, Armageddon) has made a film that plays up each of his strengths—from the cavalcade of explosions to the car chases to the frenetic action sequences. Transformers is two hours of pure Bayhem.

Of course, the film has the weaknesses of just about any other Bay flick, namely in terms of characterization. While the film is grounded nicely in its simple tale of a guy (the surprisingly talented Shia LaBeouf), a girl (the stunning Megan Fox) and a car (the yellow Autobot Bumblebee), there are a handful of characters that add little to the plot. Anthony Anderson’s hacker character is pretty unnecessary, and John Turturro, who shines in other films such as The Big Lebowski, is wasted here as an over-the-top government agent.

But let’s be realistic. This is a film about alien robots beating the oil out of each other. If characterization ranks high (if at all) on your giant robot movie checklist, you may need to get out more. It’s fun, it’s loud and it’s a nice escape for a few hours.

And escape you will. As soon as Sam’s (LaBeouf) Camaro transforms and mixes it up with a transforming police car (the Decepticon Barricade, for those of you keeping track), you’ll be roped in. It’s the first of many action scenes that just don’t let up. There’s desert combat, a highway brawl between Optimus Prime and Bonecrusher and an all-out melee between all of the Autobots and the Decepticons during the final act of the film.

But it’s not all about the action necessarily. One of the best scenes in the movie is when Sam is awkwardly trying to hide the Autobots from his parents as Optimus and crew completely trash the backyard. The sequence has a Spielbergian touch (he did executive produce, after all), and provides a quieter moment to get to know the personalities of each of these characters.

While this movie is obviously aimed at a new audience (and to get today’s kids hooked on the toys), there’s plenty here for longtime Transformers fans to chew on. Peter Cullen, who voiced Optimus Prime in the original cartoon series, returns to the role while many familiar faces round out the remaining Autobots, including Jazz, Ratchet and Ironhide. The filmmakers played a bit more free and loose with the Decepticons, both in terms of character design and vehicle types. However, when Megatron (Hugo Weaving) verbally abuses Starscream toward the end of the film you’ll be eight years old all over again.

The second disc in the set is crammed with special features, including how the Transformers concept originated over two decades ago, what it took to get the project off the ground and how the elaborate special effects were created. You get a sense of Bay’s directorial style on the set (near-frighteningly intense), and why some of the decisions in the film were ultimately made (why Megan Fox? Bay wanted the hottest 18-year-old he could find). Bay also addresses some of the Internet whining that went on during the film’s production, including the uproar over making Bumblebee a Camaro (he used to be a Volkswagen) and putting flames on Optimus Prime. For anyone interested in how summer blockbusters like this come together, this second disc is a comprehensive look at the production from conception to finished film.

It won’t necessarily change the way you look at the world or at movies, but Transformers is a spectacle that you’ll want to revisit more than once, if only to soak in more of the action. The plot may be flimsy and a bit ludicrous, but if you can buy the fact that robots have come to Earth and disguised themselves as cars and trucks (all General Motors products, by the way), then you’ll pretty much believe anything else this movie throws at you. It’s a roller-coaster ride that’s well worth the price of admission.
Posted at 11:21 AM
Email ThisBlogThis!Share to TwitterShare to FacebookShare to Pinterest
Labels: DVD, Movies, Transformers