The Internet's a funny thing. In just over decade, it's gotten easier to spread false news on the Internet than it is to spread cream cheese on a bagel. Or butter on toast. Or Paris Hilton's legs. Whichever metaphor you choose, the point is that it's easy.

In my daily scouring of the World Wide Wasteland, I came across this little gem at comicbookresources.com. Turns out, DC Comics is planning on offing Bruce Wayne (Batman, for the uninitiated and the better looking and more popular, by default) in the summer of '08. Makes sense, seeing as how there's this big movie coming out in a few months ::cough cough The Dark Knight cough cough:: and a huge publicity stunt like this might generate some interest in the books again.

While an event like this would certainly boost sales, I dare say that Batman is more than just a costume, and DC may be shooting itself in the foot over this one. And come on, does anyone else believe they'd kill off Bruce Wayne for good? If that's the case, I've got a bunch of copies of Superman #75 that I'm sure are going to put your kids through college...

So who's going to don the cape and cowl in Bruce's, er, absence? Robin? Knightwing? Alfred? Eck.

Of course, they could always go with the obvious choice: 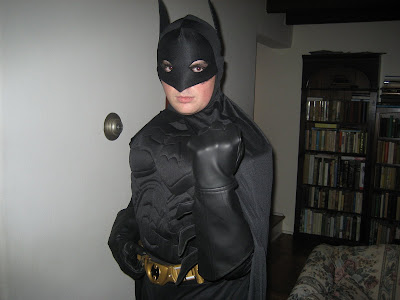