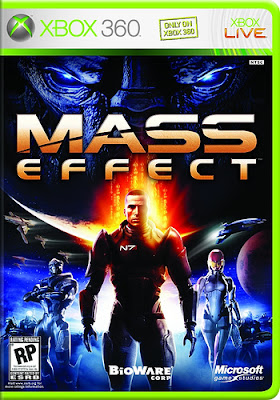 The highly anticipated Xbox 360 shooter/RPG hybrid Mass Effect hit store shelves yesterday and having snagged a copy, I must say that I’m blown away. For the uninitiated (and, by default, better looking and more attractive), Mass Effect was developed by BioWare, the team known best for its work on Jade Empire and Star Wars: Knights of the Old Republic. I should add that Star Wars: KotOR is one of the best console RPGs of all time. Suck it, Square-Enix.

At the onset, I felt at home. The game controls a great deal like Star Wars: KotOR, but places far more emphasis on real-time shooting than on turn-based action. This keeps the pace frenetic and, combined with the RPG elements of squad command and leveling up, makes for a unique immersive experience.

The story’s also top-notch so far, although it really boils down to “chase the bad guy across the galaxy.” But what a galaxy! Unlike the aforementioned Star Wars title, which dropped you into familiar surroundings, Mass Effect is totally new. While it does borrow significantly from George Lucas’ universe and other sci-fi properties, it’s fresh enough to encourage exploration into the game’s mythology.

The branching conversations are also a lot of fun, and keep things interesting in-between melees. Wanna be a jerk? Be a jerk. Wanna be an interplanetary pushover? You can do that too. The multitude of options should keep you replaying this one until the inevitable sequel.
Posted at 1:06 PM
Email ThisBlogThis!Share to TwitterShare to FacebookShare to Pinterest
Labels: Video Games