Mass Effect: Game of the Year? 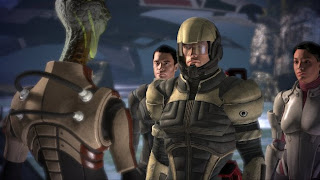 Well I’m sidelined from work today due to a vicious head cold. And while I’d normally be napping this afternoon, the whole nasal congestion thing (with that weird nostril-shifting stuffiness) makes restful sleeping impossible. So here I am at my computer, setting up my digital soap box for another one of my rants about something or another. Today’s topic? Mass Effect.

I know I’ve already written about my first impressions of this Xbox 360 RPG/Shooter hybrid, but you’ll be relieved to know that I’ve conquered this beast of a game twice since its release, and I plan on hopping into the commander’s seat of the Normandy for a third time. Why? It’s damn fun, that’s why.

And it’s not just because it’s fun to shoot things. Tons of games (particularly lately) allow you to do just that. Rather, it’s the customization. From the moment you boot up the game for the first time, you have complete control of your character, from their background to their class to their appearance. Hell, you can even give them a first name. Commander James Shepard, if you hadn’t guessed, is a badass bald Adonis. Remind you of someone you know?

Sure, the story of Mass Effect is your typical space opera fare. Chase the bad guy from world to world before he uses a superweapon to conquer the universe. Been here before? Sure you have. But you can tackle the quest in any way you wish. Wanna brave the snow-capped peaks of Noveria before venturing to the war-torn world of Feros? Be my guest. The story unfolds a bit differently depending on which missions you take on first and who’s in your party. I won’t spoil anything about that here.

Some of the most fun in this game comes through conversation with NPCs (non-playable characters) in your party, on your ship and in the various cities that you visit. Every conversation brings you closer to being a Paragon (good guy) or a Renegade (total dick). I have to admit, earning Renegade points can be damned fun, but you’ll often find yourself feeling a little shameful for threatening total strangers. Or maybe that’s just me.

The main story took me about 12 hours my first playthrough, and a little less than that on my second. But I’m also the type of person that completely ignores the various side missions that are thrown your way. But since all of your gear and experience points carry over from playthrough to playthrough, you’ll be able to breeze through the main story on replays.

Is it the game of the year? As far as single-player campaigns it most certainly is. Sorry, BioShock. You were fun, but I really had no reason to play you again after getting both endings. Mass Effect’s universe is so immersive you’ll want to revisit it again and again to explore all of the options it has to offer before the sequel hits the shelves.
Posted at 2:35 PM
Email ThisBlogThis!Share to TwitterShare to FacebookShare to Pinterest
Labels: Video Games, Wort Report Review, Xbox 360

I've decided that rather than spend my empty Xmas break at home doing nothing, I'm going to spend all of my time at my boyfriend's house during the week while he's at work, and I'm going to be hanging with his mom and playing COPIOUS amounts of Mass Effect, and not much else. I needs be stealing me a 360. During the last Great Console War, I stuck adamantly by the PS2, preferring to have a larger variety of games than to have fewer that were better quality.

Now, the tables have turned. The 360 seems to have MORE games than the PS3, and they're STILL better. And the 360 costs less. Oh, Microsoft, I never thought you'd own my heart. But ours is a love that can never be. Because I just can't friggin' afford it.

PS- did you get my facebook message about Broken Frontier? Sorry it took so long, me and the friend went randomly incommunicado because we were just both so busy.