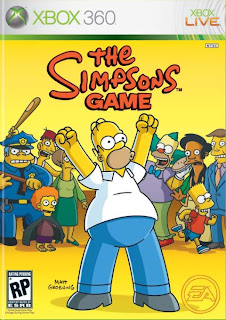 Whether you know it or not, the Simpsons have had a rich history in video games. From the early days of Bart vs. the Space Mutants to the Konami arcade game to modern missteps such as The Simpsons Road Rage and The Simpsons Wrestling, America’s favorite animated family has been featured in video games almost as long as they’ve been on television. Unfortunately, most of these games have been utter garbage. Hoping to shift this momentum of mediocrity, Electronic Arts released The Simpsons Game in October. Surprisingly it’s quite good, particularly if you’re a diehard Simpsons fan.

Although released following the Simpsons’ successful foray onto the big screen (The Simpsons Movie, for cave dwellers), The Simpsons Game has absolutely nothing to do with the blockbuster film. Instead, it’s a self-referential romp in which each of the family members discovers that they’ve been given video game powers from a mysterious game guide (for The Simpsons Game, naturally) that falls from the sky. Of course, they use these powers for good, mostly. Lisa (with her magical Buddha powers) foils Mr. Burns’ plot to cut down a forest to produce a line of luxury tooth picks, Bart (as Bartman) goes after a gang of bullies at the museum, Marge uses her crowd control powers to ban a violent video game and Homer, well, Homer competes in an eating contest after acquiring the power to get really, really fat. Then there’s the obligatory alien invasion (courtesy of Kang and Kodos), which forces the family to seek out help from the Internet, where they must play through various Simpsons games currently in development. Complicated? Sure. But it’s pretty fun.

The game skewers just about every game genre along the way, lampooning popular titles such as Gauntlet, Space Invaders, Pokemon, Medal of Honor, Shadow of the Colossus and Grand Theft Auto just to name a few. The writers and developers definitely knew their audience, and packed the game with a lot of gamer in-jokes. One of my favorite stages is “Enter the Cheatrix,” where Bart and Lisa must make their way through the various stages of game development while fighting off wave after wave of Madden football players before coming face-to-face with Donkey Kong….or a giant barrel-throwing monkey that isn’t Donkey Kong due to fear of copyright violation.

Graphically, the game looks amazing. If you’ve ever imagined what a 3D Springfield might look like, this is pretty much it. It’s done in a cel-shaded style (think The Legend of Zelda: The Wind Waker), with some 3D elements thrown in. From the first stage, which puts you smack dab in the middle of Homer’s imaginary Land of Chocolate (if you’ve seen the show, you’ll get the reference), you’ll know that you’re not just playing a cash-in licensed title. The Simpsons Game looks great, and for the most part, it plays great.

Gameplay is platform-heavy, with a fair amount of button-mashing combat thrown in. Fending off enemies is the most laborious task in The Simpsons Game, as the fight mechanics aren’t exactly solid. Enemies (who often respawn again and again) just sort of rush at you while you tap the attack button and hope for the best. Also, there usually aren’t more than two enemy types per level. For example in the Japanese level, you’ll be fighting dozens of sumo Comic Book Guys who never seem to let up. Would it have killed them to throw in some variety?

Speaking of Comic Book Guy and gripes, he often chimes in to point out gaming clichés as you come across them, such as the inability to swim, exploding barrels, and, yes, lack of enemy variety. This lets you excuse some of the game’s lesser points, of which it has a few, but you’ll overlook them for the most part. When it sucks, it lets you know it sucks, so that makes it sort of ok. You’ll chuckle, at least.

Which brings me to my next point: This game features some of the best recent Simpsons writing outside of the movie. All of the cutscenes are animated in true Simpsons style, with roughly 40 minutes of new footage. This is like a fully interactive, brilliant episode of the series.

While it may only be worth a rental for the casual Simpsons fan, as it only takes around 8 hours to complete, hardcore fans should really consider picking up The Simpsons Game. It’s funny, it’s fun to play and lets you play Dance Dance Revolution with God at its finale. What other game lets you do that?
Posted at 10:19 PM
Email ThisBlogThis!Share to TwitterShare to FacebookShare to Pinterest
Labels: The Simpsons, Wort Report Review