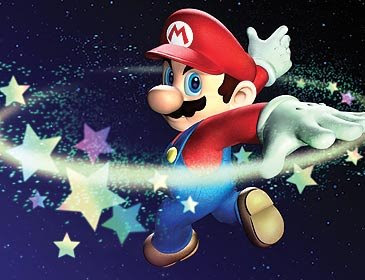 It’s hardly surprising that the best Mario title in a decade is also the best platformer in years. Super Mario Galaxy delivers on all levels, with its intuitive control scheme, innovative level design and player accessibility. Whether you grew up with Nintendo’s mustachioed plumber or are visiting this series for the first time, you’re going to have fun with Super Mario Galaxy.

The story’s pretty much what you’re used to. Bowser has once again kidnapped Princess Peach, only this time, Mario must go on an interstellar voyage to rescue her. Of course, he’s going to have to collect a fair amount of stars—familiar to anyone who has played the last two installments of the series—in order to power the spaceship that will lead him to Bowser.

Controls are fairly basic, and make use of both the Wii remote and the nunchuk attachment. Spin attacks are performed with a flick of the wrist, and the jumping mechanics are similar to previous 3D Mario outings. With many levels requiring Mario to travel from planetoid to planetoid, you’ll make use of Sling Stars and Launch Stars to progress, accessed through shaking the remote or using it as a pointer. Certain levels also require other unique uses of the remote, such as a surfing stage where Mario must mount a manta ray.

I know I’m not alone on this, but I thought that 2002’s Super Mario Sunshine was a massive disappointment. Billed as a follow-up to 1996’s groundbreaking Super Mario 64, Sunshine was a repetitive, gimmicky letdown that hardly felt like a proper Mario title. Thankfully, Galaxy looks, feels and plays like a true sequel to Super Mario 64 and may be one of the best games in the series. The platforming is challenging without being frustrating, and the level variety ensures that you’re never stuck in the same environment for too long.

While graphically the Wii doesn’t stand up to the visuals of the Xbox 360 or the Playstation 3, Super Mario Galaxy is a sight to behold. It’s colorful without being nauseatingly saccharine, and stands apart in the series while at the same time paying visual tribute to earlier entries in the series. Each level is swarming with Mario-esque bad guys, including goombas and koopa troopas, and you'll see plenty of familiar green pipes, mushrooms and gold coins mixed in with some new surprises.

Setbacks are minor. Some of the suits, such as Mario’s new bee outfit, don’t work as well as you’d like them to, and some of the environmental mechanics can be a tad frustrating, but chances are you won’t find yourself throwing the controller in disgust. You may throw it, however, because you forgot to tighten your wrist strap, but that’s your problem. Not Mario’s.

Remember what it felt like to fire up Super Mario Bros. 3 for the first time? Or the way it felt to see the Mushroom Kingdom in three dimensions for the first time with Super Mario 64? That’s exactly what it feels like once you land Mario on his planetoid in Galaxy. Galaxy is the evolution of gaming’s most prolific series, and is everything you want in a next-gen Mario title.

While it’s always risky saying that one game is worth buying a system for, the latest Mario adventure really is one of those games. For anyone that has been dissatisfied with game variety on the Wii, Super Mario Galaxy is a breath of fresh air. Although, of course, there is no air in space.
Posted at 7:50 PM
Email ThisBlogThis!Share to TwitterShare to FacebookShare to Pinterest
Labels: Nintendo, Wii, Wort Report Review