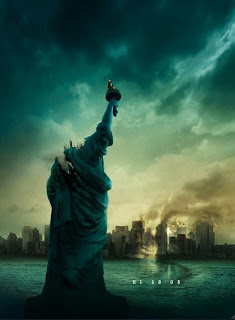 Cloverfield is one of those rare event films that lives up to all of its insurmountable hype. A hand-held take on the monster disaster film—think “Godzilla Witch Project,” Cloverfield thrills consistently without wearing out its welcome during its lean 84 minute running time.

Of course, being a disaster movie, Cloverfield is set in midtown Manhattan (apparently New York is the only city in the United States as far as Hollywood is concerned), where a group of twenty-somethings are throwing a surprise party for Rob (Michael Stahl-David), who’s headed for Japan for a new job the following day. We’re introduced to several characters during the opening scenes of the film, including Lily (Jessica Lucas), cameraman Hud (T.J. Miller), his would-be love interest Marlena (Lizzy Caplan) and Rob’s sweetheart Beth (Odette Yussman). For a while you forget what this film is really about when it delves into soap opera territory with a lot of “who’s sleeping with who” dialogue, as Hud awkwardly chimes in while documenting the evening. Of course, then there’s an explosion, a roar, and some hardcore monster-on-city action. That’s what you paid for, right?

As for the monster, it’s hard to pin down what the hell it is exactly. Presumably it came from the ocean, although Hud speculates that it may be some kind of alien (“Like Superman?”). It sort of resembles a bat, but there are definite elements of crocodile, crab, spider and other creepy crawlies thrown in. It doesn’t help in the identification process when you really never get a good look at the creature until the final moments of the film.

While most monster-philes will be disappointed to learn that Cloverfield isn’t 100 percent in-your-face monster all the time, fear not. Think back to how Spielberg handled Jaws way back in 1975. While the shark is never fully revealed until the third act you get plenty of glimpses throughout, and when the shark isn’t visible you certainly feel its presence through the now-iconic John Williams score. In Cloverfield, whenever the monster is not on-screen, you absolutely know it’s nearby. When the characters are hiding on a subway platform while the military assaults the creature above, you can hear its deafening roars and footsteps as the lights flicker on and off. You never get the grand, sweeping special-effects shot that shows off the weeks and months put into animating the creature, just bits and pieces when appropriate. You see only what the characters see, and know only what the characters know. You never learn what the creature is or why it's smashing everything in its path, but this only serves to ignite the imagination. And that's never a bad thing.

With a movie like this, there isn’t much of a threat to the main characters if they’re hiding in the tunnels right? Wrong. Producer J.J. Abrams and director Matt Reeves injected this film with a fair amount of one-on-one terror with smaller creatures, or parasites, that fall off of the larger creature. Resembling a cross between a crocodile and a spider-crab, these things are quick, ravenous and have a nasty surprise for anyone they happen to bite. They add a whole new level of horror to an already thrilling film.

And while this film is action-packed, it’s also poignant in its perhaps unintentional allusion to the 9/11 terrorist attacks. The street-level view of toppling buildings, panicking crowds, billowing smoke and falling debris absolutely conjure up images of that infamous day, and may draw some criticism from some audiences who may find the use of such imagery—unavoidable though it may be—in something as seemingly frivolous as a monster movie.

With months of Internet viral marketing behind it, Cloverfield came out of the gate this weekend as one of the most unique theater-going experiences one is likely to encounter this year. While monster movies are in no way new to American audiences raised on King Kong, Godzilla and other celluloid city-stompers, Abrams and Reeves have turned the genre on its ear and created something truly innovative in originality-starved Hollywood.

Bring on the sequel.
Posted at 10:42 PM
Email ThisBlogThis!Share to TwitterShare to FacebookShare to Pinterest
Labels: Movies, Wort Report Review

No! Bring on NO sequel!

I loved, loved, loved Cloverfield. So good, I had to remind myself to unclench afterwards. I had to press my hand over my mouth to muffle my screaming during the encounter with the little monsters.

I don't want a sequel. I want to remember it in its glory, I want to revel in the not knowing where it came from. I want to be forever tantalized rather than inevitably disappointed.

Not every awesome movie needs a sequel. I want Hollywood to realize that someday. I'd be happy if they started by not giving Cloverfield one.

The mystery is the best part of the whole thing! Not knowing what it was or even WHY it was! If they make a sequel it will have to explain too much. A sequel will be like watching a music video of your favorite song and it being nothing like you imagined in your mind when you first heard it. It ruins the whole thing!

The only way I would watch a sequel would be if they, A) "found" another tape of that night from a different perspective. B) If the monster f*ed up the whole world and there were a few humans fighting to survive. Or C) The monster Fights Mothura. That’s it. I wont settle for less.

I hear the "other found tape" is a possible sequel premise. And I agree that a sub-par sequel would cheapen the original. However, another tiny slice of the goings-on from a different perspective might be fun. From what I recall, the "Blair Witch" sequel was pretty much full of epic fail.