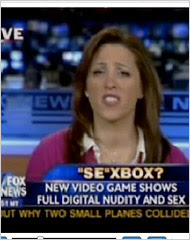 After angry video gamers spammed her Amazon.com book pages into oblivion last week, pop psychologist Cooper Lawrence retracted her misinformed criticism of Bioware's Mass Effect in an interview with The New York Times last week.
According to the article, Lawrence had been briefed on the game's alleged "pornographic" content prior to her appearance on Fox News' The Live Desk With Martha MacCallum and had never played the game nor had she seen the titillating clip in question. During a brief scene in the sci-fi/action game's final act, the main character engages in a PG-13 sex romp with one of the other members of his/her crew. Of course Lawrence was misinformed, claiming on national television that the game objectified women and was a bad influence on impressionable young minds.
"I recognize that I misspoke,” she told the Times last week . “I really regret saying that, and now that I’ve seen the game and seen the sex scenes it’s kind of a joke. Before the show I had asked somebody about what they had heard, and they had said it’s like pornography." She then added, "But it’s not like pornography. I’ve seen episodes of Lost that are more sexually explicit.”
It's startling that even following the release of such groundbreaking artistic accomplishments such as Mass Effect, BioShock and Super Mario Galaxy, games remain pop culture's perennial scapegoat. Nevertheless, her retraction represents a victory for the gaming community, which came out in force to expose the ignorance at work in that fateful Fox News segment.
Posted at 10:45 PM
Email ThisBlogThis!Share to TwitterShare to FacebookShare to Pinterest
Labels: Video Games, Xbox 360