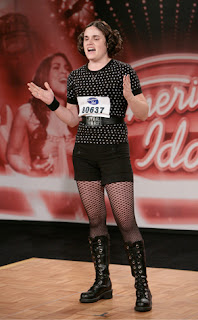 It should come to no surprise to any of you that I have been a hardcore Star Wars fan for most of my life. I’ve seen each of the films countless times, I’ve read libraries of off-shoot novels and I’ve purchased enough of the merchandise to choke ten rancors. I’m a geek. Unapologetically, thoroughly and consistently.

However, during last night’s American Idol premiere, a part of me died inside, as I’m sure was the case for many Star Wars fans who happened to get a glimpse of Christine Tolisano’s audition. It was as if millions of voices suddenly cried out in terror and were suddenly silenced.

You see, Christine thought it would be a fantastic idea to come to an American Idol audition complete with Princess Leia earbuns and Star Wars logo belt buckle. Needless to say, I cringed, you cringed, and George Lucas might have cringed as well.

Like I said, I’m a geek. I was wearing a Boba Fett t-shirt while I was watching the show, in fact. But somewhere down the line you realize that if you let your geeky obsessions truly define you in certain situations, then you're selling yourself short. Christine, American Idol is giving you a chance at a record contract. At the very least, it’s a shot at being on television. Did you really think that a Princess Leia hairstyle was going to win over Randy, Paula and Simon? It’s the equivalent of me wearing my Star Wars tie (I have one) to a job interview. All they’ll see is Mark Hamill staring them in the face from right above my navel. And that’s not a good first impression.

I should also point out that following her unsuccessful audition, she proceeded to complain that the judges don't recognize individuals in selecting contestant. Individuals? She based her hairstyle on a oft-imitated fictional character and had a movie logo for a belt buckle. What’s individual about that?

Star Wars fans have had a rough couple of years. Public perception of the prequel films was less than stellar and all of the conventions and the hoopla brought a lot of frightening fringe individuals out of the woodwork that cling far-too-tightly to their Lando Calrissian action figures. People began starting their own Jedi religions, standing on movie lines for months at a time and engaging in other agonizing displays of overzealous fandom. In a way, rabid devotion can be cool. People can and should be passionate about what they love. But like anything else, it does get taken a tad too far. Wanna wear a Star Wars t-shirt? That's cool. I do it all the time. Have a Star Wars collection? Great. I have a pretty epic one myself. But it's when you start throwing your obsession in people's face with an awkward ferocity that would make a wampa blush that you ruin it for the rest of us. Let it be part of you, not all of you.

Around the third time someone rang me on my cell to tell me that the “Star Wars chick was my dream girl,” I realized that her display has set the mainstream geek movement back quite a ways. Not to mention the hairy fat guy who found it appropriate to dress in the Princess Leia slave outfit from Return of the Jedi for his audition last night, but that’s another article entirely.
Posted at 9:05 PM
Email ThisBlogThis!Share to TwitterShare to FacebookShare to Pinterest
Labels: Star Wars

you are my most favoritest geek ever! don't ever change. and i promise you that you can do better than that crazy star wars chick. and don't knock the princess leia hair. some people can rock it. me for example?

p.s. thank you for posting on my birthday!