The Cake is a Lie 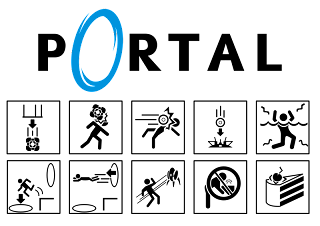 I know I’m saying nothing that hasn’t already been said by countless others, but I really must congratulate the team at Valve for their fine, fine work on Portal, one of the most satisfying games I’ve ever had the privilege to experience.

Bundled as part of The Orange Box—which also includes the phenomenal Half-Life 2, both of its current expansion packs and the multiplayer shooter Team Fortress 2—Portal redefines what it means to be a shooter. In it, you play as the silent protagonist Chell as you make your way through a series of puzzles in the Aperture Science Enrichment Center armed only with a “portal gun.” This gun allows you to create doorways for yourself to pass through and solve each of the game’s 19 chambers. But are things really as they seem? And what’s the deal with GLaDOS (Genetic Lifeform and Disk Operating System), the artificial intelligence with the eerily soothing voice that provides the only exposition you’re going to find in this stripped-down game? Why am I so attached to my Weighted Companion Cube? And what’s the deal with the promise of cake at the test’s conclusion?
This is exactly the kind of title that the gaming community needs to herald as an artistic approach to interactive entertainment. Like BioShock and Mass Effect before it, Portal is a masterpiece. Fortunately The Orange Box is multiplatform, so just about anyone can jump in. And out. And in again. If you’d played the game, that last statement would be hilarious, or at least mildly amusing for its allusion to portal technology. As is, it just seems kind of creepy.
Speaking of creepy, this game has one of the oddest end-credit songs you’re likely to hear anytime soon. It's awesome, but I have no idea why. I also kind of want it on my iPod.

The Orange Box is a must-buy for this title alone. All of the other gaming goodness packed into this $60 bundle doesn’t hurt either.
Posted at 10:20 PM
Email ThisBlogThis!Share to TwitterShare to FacebookShare to Pinterest
Labels: Video Games, Wort Report Review