The King of Kong: A Wort Report Short 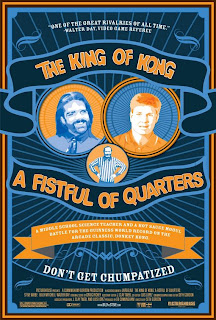 The King of Kong: A Fistful of Quarters may be the best documentary released last year that you didn’t see. While one man’s struggle to dethrone the world champion of Donkey Kong may seem trivial to most, the film treats its subject matter with such respect that even non-gamers will find something to enjoy about this joystick journey.

As the credits rolled, one thing about this film really stuck with me: Donkey Kong world record-holder Billy Mitchell comes off as a major league douchebag. Just read this quote:

“No matter what I say, it draws controversy. It’s sort of like the abortion issue.”-Billy Mitchell
Yep. He just compared a video game competition to abortion. Did you get douche chills?

From what I’ve read, director Seth Gordon had a definite bias, choosing a hero in the humble up-and-comer Steve Wiebe and a villain in Mitchell. Whether this rivalry was over-dramatized or not, it makes for compelling filmmaking.
If you’re checking out The King of Kong on DVD, be sure to watch the bonus features, which include extended interviews and more footage of Mr. Awesome, a.k.a. Roy Shildt, the Missile Command record holder. His level of insanity is bafflingly entertaining.
While The King of Kong might not be worthy of a purchase—particularly if you’re not into classic gaming—it’s a solid, solid rent.
Posted at 12:01 AM
Email ThisBlogThis!Share to TwitterShare to FacebookShare to Pinterest
Labels: Movies, Video Games, Wort Report Short

Hey that guy is a dick! I saw a Pac-man competition on the nerd channel and he, apparently, was the first kid ever to get the highest score possible in pac-man. Except the only problem is he does not seem to have moved past that at all. He is like a child star, stuck in that role forever because that is all he can do. Retro gaming tournaments. Cue dramatic tear