What I’m Listening To: Andrew W.K.’s I Get Wet 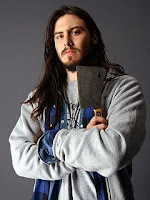 Sometimes, you need to thumb through your CD (or MP3) collection to find a specific album or a song that takes you back to a certain time and place in your life. I purchased Andrew W.K.’s I Get Wet in the spring of 2002 just months prior to high school graduation, the precursor to that summer of invincibility before that fateful first trip to college. Andrew W.K. seemed at first to be a novelty act, and maybe he was. His first single “Party Hard” was a simple, bombastic yet infectious ode to partying that I couldn’t resist.

I would be lying if I said that this album was incredibly deep. Each of the album’s 12 songs is about little more than partying, getting the girl and never giving up. That’s pretty much it. However there’s a palpable energy behind each synthesized note and each grizzled vocal. Andrew W.K. is passionate about each of these songs, and damn it, you should be too.
I Get Wet is like the soundtrack for the best 1980’s movie that hasn’t been filmed yet. From the first guitar riffs of “It’s Time to Party” to the bizarre fight anthem “Ready to Die” to “I Love NYC” to the oddly uplifting “Got to Do It,” you’re taken on a musical journey. And I think that was the idea. It’s simple music that tells a simple story, and it’s obviously not for everyone. Andrew W.K. is sort of like Monty Python: Either you love him or you hate him. And, like Monty Python, if you do turn out hating Andrew W.K., I secretly judge you.
Posted at 7:47 PM
Email ThisBlogThis!Share to TwitterShare to FacebookShare to Pinterest
Labels: Music

James! Next time AWK is on tour we are Going! He puts on THE BEST LIVE SHOW IVE EVER BEEN TO! Period.

And i too judge awk haters, but not secretly.

p.s. the link below is spam.