A Look At the Fanboys Controversy 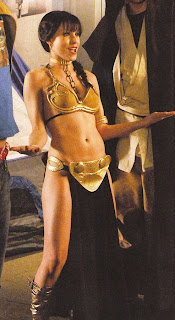 While this article may seem at first to be a thinly-veiled excuse to post a picture of Kristen Bell in a gold Princess Leia bikini, I’d like to direct your attention to Fanboys, a yet-to-be-released comedy about a group of friends trying desperately to break into Skywalker Ranch to be among the first to see Star Wars Episode 1: The Phantom Menace. If you’ve seen the trailer, it seems like your typical sophomoric road trip movie peppered with Star Wars references and gross-out humor. Harmless enough, right? Hardly. This film has been causing a major stir in recent months both among studio heads and the fanboy community that it both satirizes and honors.

It feels like Fanboys—directed by Kyle Newman and starring Bell, Sam Huntington, Chris Marquette, Dan Fogler and Jay Baruchel—was supposed to have come out ages ago, and indeed it was. The film was originally slated for release in 2007 to coincide with the 30th anniversary of the original Star Wars film. However, last-minute reshoots pushed the release date to 2008. While the film was lauded by filmmaker and Star Wars fan Kevin Smith and was even granted the blessing of Star Wars creator George Lucas, The Weinstein Company had some issues with one of the film’s subplots. In the original cut of the film, one of the main characters is battling cancer and wishes to see the Star Wars prequel before he dies. The Weinsteins reportedly demanded that the film be recut to remove the cancer elements and inject the film with more raunch. Fan outcry was so strong in February of this year that the 501st Legion—arguably one of the most dedicated Star Wars fan organizations in existence—encouraged fans to boycott the film outright. In a post on Ain’t It Cool News, a 501st member calling himself “Jek Porkins” writes, “We’re going to attack the Weinstein Company death star, even if it is a suicide mission.” I should note that Jek Porkins was the first X-Wing pilot to be incinerated in the first Death Star assault.
What do I make of all this? I like the idea of a film like this acting as a love letter to dedicated Star Wars fans that take things just a little too far, but the outrage over the cancer subplot omission may be a tad out of place. Cancer just isn’t funny, especially not in a comedy centered around rabid Star Wars fanatics. Also, making viewing The Phantom Menace a cancer patient’s dying wish adds a tinge of dramatic irony to the whole film that may or may not have been intentional. If you can remember, a majority of hardcore fans were fairly displeased with the film, with many feeling that it failed to live up to its massive hype.

Do I think Fanboys will be a great film? Hard to say. It's never a good sign when a film like this suffers from so many delays and false starts, and I think popular culture may be a bit burnt out on Star Wars tributes after last year’s Robot Chicken and Family Guy Force-centric episodes. I know I'm kind of getting there.
As for this film’s new release date, well, your guess is as good as mine. One can only hope that the film pulls itself out of post-production Hell and sees the light of day in the next few months. It would be a shame for a film with this kind of history behind it to get saddled with a direct-to-video treatment.
Posted at 9:49 PM
Email ThisBlogThis!Share to TwitterShare to FacebookShare to Pinterest
Labels: Movies, Star Wars

i want that outfit.