South Park is Out of Internet! 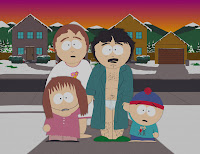 Bravo to the South Park crew for yet another brilliant Season 12 episode. While the series has become known for taking timely stabs at pop culture and current events, this week's episode takes on a more evergreen topic: our over-reliance on technology.

But in all honesty, the thought of losing Internet access is a scary one for a lot of us, and this episode truly highlighted how helpless we all would be if we couldn't log on to the Web.

To watch "Over Logging" and other episodes in their entirety, visit South Park Studios.
Posted at 10:39 PM
Email ThisBlogThis!Share to TwitterShare to FacebookShare to Pinterest
Labels: South Park, TV

Hello. This post is likeable, and your blog is very interesting, congratulations :-). I will add in my blogroll =). If possible gives a last there on my blog, it is about the Livros e Revistas, I hope you enjoy. The address is http://livros-e-revistas.blogspot.com. A hug.

Hello,
Your blog is interesting. You are a super good writer. Would you like to increase the size of your penis? If so, please check out http://www.cialis.com