Greetings, Wortmaniacs! For once, I decided to kick back for a weekend, which of course meant that I spent much of it running errands. From last minute Mother’s Day shopping to spending a ridiculous amount of money gassing up the ol’ Subaru, I barely had a moment to myself.

Fortunately, I was afforded a few hours earlier today to dive into Grand Theft Auto IV, which let me…run errands. Don’t get me wrong, I love the game and think it’s one of the finest examples of modern gaming in existence, but one can’t help but chuckle at the tasks given to main character Niko Bellic throughout the game’s first few hours. Let us smash into cop cars and mow down digital pedestrians and gamers are more than willing to do a crime boss’ grocery shopping. I’m sure there’s some kind of social commentary there, right? 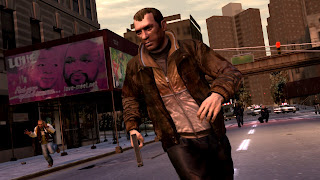 While it’s a little late for a formal review—just about everyone in the gaming press has been touching on it ad nauseum for the past two weeks—but I really have to gush about how well-crafted this game is. Kudos to Rockstar Games for creating such a detailed virtual city that lets you do pretty much anything you want. From bowling to street racing to random acts of brutality, Liberty City has it all. While most gamers are satisfied by just punching in a cheat code and running amok until the cops take them down, I’m more of a conservative Grand Theft Auto player. Yes, those do exist. I always find that to really stretch the play value of these “sandbox” types of games, playing by the in-game rules is pretty satisfying. Sure, I could enter a weapons cheat and breeze through a lot of the more difficult missions, but there’s a certain satisfaction to employing your own strategies and progressing through trial and error. At least, that’s what I’ve found. That’s not to say I don’t end up on the wrong side of the law—sometimes driving on a crowded sidewalk is just faster—but by and large, I play the game as intended.

And playing by those rules has always been a lot harder for me personally in the past because I could never get the hang of the game’s combat controls. Thankfully, the gunplay and targeting has improved immensely in this latest installment, particularly when you’re going up against multiple opponents. Grand Theft Auto III, Vice City and San Andreas had some controller-throwingly difficult shootouts, but I’ve yet to encounter any in GTA IV. But then again, I’m still pretty early in the game’s storyline, so you may yet be able to buy tickets to the “James Wortman Wireless Airshow.” I’ll keep you posted.

As for online multiplayer, it’s a fun diversion and gives you plenty to do—but stay away from the Team Deathmatch gametype. The auto-aiming eliminates skill entirely and gameplay boils down to locking onto an opponent and tapping the fire button until one of you falls down and respawns. But try out a few of the multiplayer options and see which ones you like. As I said earlier, this game really does have something for everybody.
Posted at 10:29 PM
Email ThisBlogThis!Share to TwitterShare to FacebookShare to Pinterest
Labels: Video Games, Wort Report Review

Check out this street racing documentary at this website. The site should be up in less than a week.