Indiana Jones and the Kingdom of the Crystal Skull: A Wort Report Review 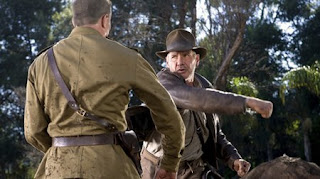 Indiana Jones and the Kingdom of the Crystal Skull does little to reinvent the series or truly justify the character’s return to the silver screen after 19 years, but as soon as Harrison Ford dons that iconic fedora a few minutes into the film you can’t help but fall under its spell. If adventure has a name, it’s still Indiana Jones.

At the beginning of the film, you’re immediately aware of the passage of time since The Last Crusade. Instead of Nazis, we’re dealing with the threat of communism and the paranoia that accompanied it in the 1950s. Indiana Jones and his friend George “Mac” McHale (Ray Winstone) are kidnapped by a group of Russians—led by Irina Spalko (Cate Blanchett)—which forces then to locate an object locked away in a cavernous warehouse that should be familiar to longtime fans of the series. Of course, Indy is Indy after all, albeit a bit grayer and more grizzled since the last time we saw him, and he escapes the Russians in typical fashion. If you’re not grinning ear to ear in the cinemas when he reaches for his whip for the first time, then this movie clearly is not for you.

Indy eventually makes his way back to his university, from which he is soon blacklisted due to his suspected association with the Reds. At an age where “life stops giving you things and starts taking them away,” Indy plans to hop on a train for New York and, hopefully, find a new teaching position overseas. Along the way, a run-in with Mutt Williams (Shia LaBeouf) leads him to South America and a journey to return a mystical crystal skull to its proper resting place. You see, only by returning the skull to the Temple of Akator can its power be unleashed. And have you guessed that Spalko and the Soviets are after it too?

While the relic this time around may require a tad more sigh-inducing exposition than the Ark of the Covenant, the Sankara Stones or the Holy Grail in the first three films, the rest of Crystal Skull zips along at a jaunty pace making it a worthy third sequel to Raiders of the Lost Ark. It’s better than Temple of Doom and on par with The Last Crusade, matching the latter film in both tone and pacing. Of course, like other films in the series, it has its fair share of flaws. Marion Ravenwood (Karen Allen) shows up at around the middle of the film and isn’t given all that much to do aside from revealing one of Hollywood’s worst-kept secrets in recent years and John Hurt is wasted as the delirious Professor “Ox” Oxley. Unfortunately, Hurt’s character gives an already crowded cast needless bloat. We came to see Indiana Jones. Why does he need so many sidekicks?

This film also stretches the already-over-the-top sensibilities of the Indy universe in two particular scenes. In the first act, Indy escapes a nuclear blast by hiding in a lead-lined refrigerator and emerges unscathed after being launched into the air and violently crashing to the desert floor. Later on, Mutt does his best Tarzan impression as he swings to the rescue on some jungle vines with the help of some computer-generated monkeys. There’s asking the viewer to suspend disbelief and then there’s insulting their intelligence. Those two moments take bold, awkward steps into the realm of the absurd. 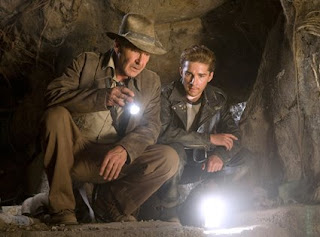 But there’s so much to love about this film that you’ll forgive director Steven Spielberg and executive producer George Lucas for Crystal Skull's occasional excess. Blanchett’s Spalko is one of Indy’s best foes, while LaBeouf turns in a tremendous performance as this franchise’s heir apparent, if they choose to go in that direction. While the Internet was quick to pounce on LaBeouf’s performance early on, he’ s right at home in the film’s quiet scenes as well as its high-octane set pieces, such as a university chase and a riveting race/swordfight through the Amazon.

And then there’s Harrison Ford, who comfortably wraps himself in the role of Indiana Jones like a well-worn leather jacket. Indy still throws the best punches in cinema, still falls ass-backward into lucky situations (sometimes literally) and still oozes swashbuckling bravado better than most action stars 30 years his junior. He also holds his own against a terrifying army of incredibly cool-looking carnivorous ants near the film's finale. But he still hates snakes.
Will you walk out of the theater with a blown mind? No. Will you walk out feeling as though you’ve seen Indiana Jones’ finest adventure? Not at all. But you’ll be satisfied. Indiana Jones didn’t need to return, but we’re all glad to see him again after all these years. But then again, as Indy said himself, “It’s not the years, it’s the mileage.”

Whether you grew up with the series or not, Indiana Jones and the Kingdom of the Crystal Skull is a summer blockbuster done right.
Posted at 12:07 AM
Email ThisBlogThis!Share to TwitterShare to FacebookShare to Pinterest
Labels: Indiana Jones, Wort Report Review