Robert Downey Jr. Owes His Life to the Burger King 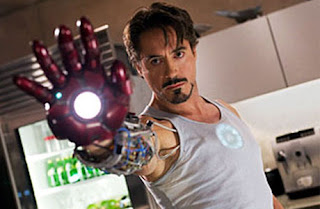 Remember that scene in Iron Man when, after narrowly escaping a terrorist hideout in his brand-new set of iron overalls, Tony Stark immediately asks for an American cheeseburger? Remember when everyone in the theater groaned when Tony was handed a Burger King bag—logo prominently displayed—in a flagrant showcase of product placement? Well, the appearance of the scene-stealing Whopper may not have been as commercially-driven as we all thought it was.

One-time drug addict and Iron Man star Robert Downey Jr. told Britain's Empire magazine that in 2003, while driving down the Pacific Coast Highway in a car filled with "tons of f--king dope," a visit to the fast food chain resulted in a life-changing decision to abandon his addiction, rethink his life and toss his drugs into the ocean.

"I have to thank Burger King," the star told Empire. "It was such a disgusting burger I ordered. I had that, and this big soda, and I thought something really bad was going to happen." It's not the most glowing endorsement, but hey, that "disgusting burger" may have saved Downey Jr.'s life.

And with the success of Iron Man, which has rocketed past the $500 million mark worldwide—things are indeed looking up for the once-troubled star. Look for his highly-publicized cameo in Marvel Studios' The Incredible Hulk on June 13.