Transformers 2 Has a Title!

If you're like me, your one concern regarding the upcoming Transformers sequel is how many gratuitous shots of Megan Fox's glistening midriff director Michael Bay has planned. Okay, the giant transforming robots are pretty cool too.

Apparently, the second film in the series will be called Transformers 2: Revenge of the Fallen. Personally, I think it's kind of bland when they could have easily gone with How Megatron Got His Groove Back or Transformers 2: New Characters Mean New Toys.

Since it is Friday, here's Megan Fox from the first flick for your viewing pleasure. Enjoy! 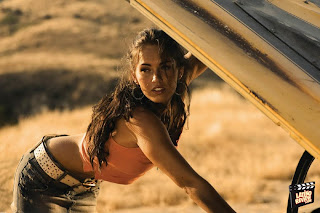 Posted at 11:07 AM
Email ThisBlogThis!Share to TwitterShare to FacebookShare to Pinterest
Labels: Movies, Transformers