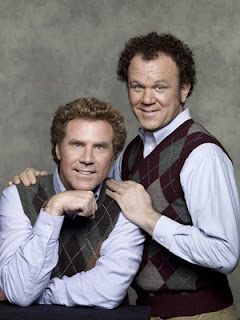 A new Will Ferrell movie stirs up strange feelings in anyone who thoroughly enjoyed his 2004 big-screen star turn in Anchorman: The Legend of Ron Burgundy. That film’s farcical take on 1970s television journalism was inspired, albeit gloriously unintelligent. Directed by Adam McKay, who co-wrote the film with Ferrell, Anchorman reveled in its lowbrow intentions, and was propelled to instant-classic status due to a strong ensemble cast, improvised dialogue and Ferrell’s proficiency at playing a narcissistic manchild.

After Anchorman’s success, Ferrell had found his niche: dumb movies where he plays a loudmouthed idiot. However his niche soon became a rut. From Kicking & Screaming to McKay’s subpar Talladega Nights: The Ballad of Ricky Bobby to the abysmal Semi-Pro, Ferrell seemed destined to play the same exact self-absorbed character in mediocre films until we all grew sick of him. We'd always hope for stupidly amazing, but—with a few exceptions such as Elf and Stranger Than Fiction—we usually got amazingly stupid.

Thankfully, the just-released Step Brothers is easily Ferrell’s best comedy since Anchorman. He once again collaborates with McKay—the film’s co-writer and director—and joins his Talladega Nights co-star John C. Reilly. This time, thankfully, the team of Ferrell, Reilly and McKay is working with much better material than a tepid NASCAR spoof. Reilly and Ferrell play Dale Doback and Brennan Huff, two middle-aged slackers who still live with their single parents (Mary Steenburgen and Richard Jenkins). When their parents fall in love and get married, the two manchildren are forced to share a room. There’s your premise. Naturally, shenanigans ensue.

And the shenanigans, I must say, are pretty damned funny. Reilly and Ferrell practically ooze profanity in this raunchy R-rated buddy film, and almost all of it is quote-worthy. Like Anchorman before it, Step Brothers’ strength lies in its back-and-forth dialogue, most of which seems to be completely improvised. And the premise allows for some genuinely hilarious moments with these characters, from sleep-walking to job interviews to tea-bagging a drum set (don’t ask).

Ferrell is playing the same role that we're used to seeing him play, but this time his film persona is organic to the plot, flimsy though it may be. It's not another "Will Ferrell sports comedy," mercifully, and teaming him with someone like Reilly makes complete and total sense. A joke will fall flat here and there, but Step Brothers is a rapid-fire comedy. Don't worry if a dick, poop or fart joke lets you down; this film ensures that there will be another one coming along in just a few seconds.

While its toned-down marketing does it very little justice, Step Brothers is an uproariously funny and fairly consistent film. It’s a comedy for the giggling potty-mouthed 12-year-old in all of us. Will Ferrell, welcome back.
Posted at 11:57 PM
Email ThisBlogThis!Share to TwitterShare to FacebookShare to Pinterest
Labels: Wort Report Review