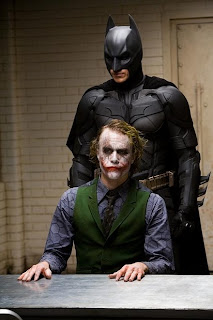 After its third straight weekend at the top of the box office heap, The Dark Knight continues to wow audiences and demolish box office records, Reuters reports. The blockbuster Batman sequel cleared the $400 million mark after just 18 days in U.S. and Canadian theaters, becoming the fastest film to reach that milestone domestically. The previous record holder was Shrek 2, which took 43 days to reach $400 million during its 2004 theatrical run.

According to Reuters, its distributor, Warner Bros. Pictures, expects The Dark Knight to earn at least $100 million more in North American ticket sales, which would place it ahead of No. 2 all-time box office record holder Star Wars (1977). The No. 1 all-time box office champ, James Cameron’s Titanic (1997), earned $601 million domestically.
King of the World? I’d like to introduce you to the Clown Prince of Crime.
For those who have yet to see the Christopher Nolan’s phenomenal Batman Begins follow-up, it lives up to its astronomical hype and critical praise. An Oscar-worthy performance by Heath Ledger brings the maniacal Joker to the big screen like never before, while Christian Bale cements himself as the definitive Caped Crusader. Not only is The Dark Knight a pitch-perfect comic book adaptation, but it’s hands-down the best film to hit theaters this year.
Posted at 9:37 PM
Email ThisBlogThis!Share to TwitterShare to FacebookShare to Pinterest
Labels: The Dark Knight

The film is also #1 on IMDB (which is calculated by user votes). Honestly I'm surprised how long it's sustained there since it was released. But #1? Definitely top 50 of all time, but only time will tell. Shawshank Redemption will always remain #1 in my heart.