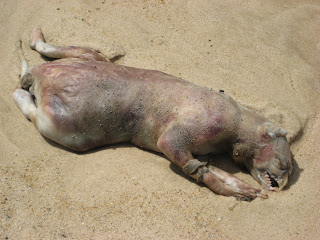 By now, you've probably caught a glimpse of the "Montauk Monster," a bizarre corpse that allegedly washed up on an East Hampton, New York beach in mid-July. Since a photo of the rotting creature surfaced on gossip site Gawker earlier this week, the Internet has been asking itself one question: "What the hell is that thing?"

Some guess that it's some sort of mutant, animal experts are sure that it's a dead dog or raccoon and others speculate it's a viral marketing stunt to promote a new Cartoon Network series about mythological creatures called Cryptids Are Real. I'm inclined to lean toward the latter, especially after reading this report from FOXNews.com, which reveals some conflicting stories about where the corpse ended up after the pictures were snapped. Information on this anomaly seems just a bit too calculated and drawn out to be legitimate. However, a part of me is hoping that there's something extraordinary at play here. What do you think?
Posted at 4:51 PM
Email ThisBlogThis!Share to TwitterShare to FacebookShare to Pinterest
Labels: Gossip, Whiskey Tango Foxtrot

I don’t know, this seems like a lot of work for Cartoon network to go through to promote a kids show and I don’t really think rotting corpses appeal to there target audience either. Although their website is pretty beefed up.

The thing that makes me wonder is the fact that "someone took it’s to hang it on their wall" seriously? I mean I know people are sick and all but I don’t know if there’s much a taxidermist can do with a hot steamy mound of unknown flesh like that! I mean does he add fur or feathers? Oh man...

Don't forget, Cartoon Network (adult swim) caused a terrorist panic last summer with a viral marketing stunt to promote "Aqua Teen Hunger Force: Colon Movie Film for Theaters." Also, one of the photographers works in marketing for Time Warner, which owns the network. Not all that far-fetched.