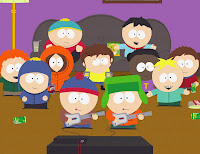 In a disturbing bit of news from MTV’s Multiplayer blog, Brett Ratner (Rush Hour, X-Men: The Last Stand) says he wants to helm a film adaptation of the Guitar Hero video game franchise. As if video game movies weren’t bad enough. Here’s what Ratner had to say:

“It could be about a kid from a small town who dreams of being a rock star and he wins the Guitar Hero competition. One of these dreams-[come-true] kind of concepts.”

Well, at least he’s not Uwe Boll, and there’s really no story to Guitar Hero that Ratner can ruin. But wow, a movie based on a game that’s loosely based on playing actual guitar? The only way this could work is if they positioned it as a mockumentary. Think King of Kong meets This is Spinal Tap. But that concept is far too inspired and might actually require some filmmaking efforts.

Also, didn’t South Park already do a Guitar Hero episode that used nearly the exact same plot as the one Ratner is describing? If Ratner's going to rip off Matt Stone and Trey Parker, one hopes he at least includes a Heroin Hero segment. Then it might be worth ten bucks.
Posted at 2:59 PM
Email ThisBlogThis!Share to TwitterShare to FacebookShare to Pinterest
Labels: Movies, Video Games