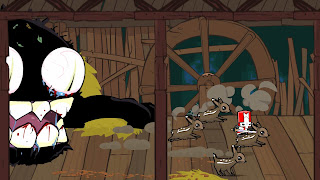 Financially, times are tough even for gamers. No matter how enticing a newly-released title may be, shelling out $60 on a video game can seem downright frivolous in our flagging economy. Thankfully, developer The Behemoth—known for its offbeat 2004 Playstation 2/Nintendo GameCube shooter Alien Hominid—has unleashed an equally offbeat beat-em-up called Castle Crashers for Xbox Live Arcade. And it'll only set you back a mere $15 (1200 Microsoft Points).

With multiplayer support for up to four players—either online or locally—Castle Crashers is your standard “save the princess” affair, taking gamers through various stages which pit them against legions of cartoonish enemies and monstrous boss characters to rescue each of the king’s kidnapped daughters. If you’ve played the original Teenage Mutant Ninja Turtles arcade game, you should have a fairly good idea of the type of gameplay employed here. As the king’s most prized warriors, each of the game’s multi-colored knights has a varied arsenal of blunt and bladed weapons at his disposal in addition to magic spells that can take out multiple enemies at once. Castle Crashers has role-playing game (RPG) elements as well, with upgradeable attributes and combos to send enemies—and their disembodied heads—flying every which way.

Castle Crashers would be a fun game no matter how it looked, but one simply cannot dismiss the charming, hand-drawn look to each of the game’s characters and locales, heightened by a downright macabre sense of humor that keeps the game fresh even in its later levels. Castle Crashers is by no means a revolutionary game, but there’s some phenomenal multiplayer fun—both local and online—to be had in this game’s kingdom. Playing it alone can be a bit frustrating, as the game’s enemies aren’t entirely forgiving when they gang up on you, but experienced gamers should have little trouble making it through Castle Crashers in a few hours of play time.

Fun gameplay, over-the-top cartoon violence and some poop jokes to boot? This is one castle worth crashing. Head over to CastleCrashers.com to learn more about this game. Every Xbox 360 owner owes it to themselves to give it a shot. At $15, you’re bound to get your money’s worth.
Posted at 8:16 PM
Email ThisBlogThis!Share to TwitterShare to FacebookShare to Pinterest
Labels: Video Games, Wort Report Review