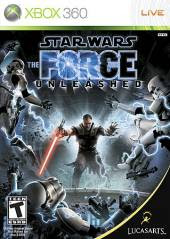 Set in between the third and fourth episodes of the film saga, Star Wars: The Force Unleashed is a game worth playing for fans —even those who were turned away from the franchise after the prequels—for its fantastic storytelling and phenomenal graphics. However, as a video game, The Force Unleashed feels at times like a rushed tie-in product with shoddy controls, a stubborn camera and some repetitive action that makes finishing the nine-level journey a needlessly tedious exercise.

After a kick-ass opening tutorial stage which lets you control the Dark Lord of the Sith himself, Darth Vader, you’re at the command of his secret apprentice code-named “Starkiller,” who has been tasked with seeking out the remaining Jedi—now in hiding after Emperor Palpatine thinned their ranks in Revenge of the Sith—and eventually rising to the challenge of helping Vader overthrow the Emperor. Of course, this wouldn’t be Star Wars without a jaw-dropping plot twist or two, so the story stays captivating throughout.
The storyline and characters are so interesting, in fact, that much of The Force Unleashed is actually better than the prequel films. The characters are varied and likeable, from busty Imperial pilot Juno Eclipse (Nathalie Cox) to the broken Jedi General Kota (Cully Fredricksen) to the comic relief—scratch that, effective comic relief—Proxy (David W. Collins), a combat droid that continues to remind our hero that he will kill him eventually.

And that brings us to Starkiller, voiced by Sam Witwer (Battlestar Galactica, Smallville), who conveys all of the internal conflict that the role demands while channeling a Han Solo-esque cockiness. Star Wars creator George Lucas would be wise to find a role for Witwer in the upcoming live-action television series. He’s convincing in ways that the prequels’ Hayden Christensen (Anakin Skywalker) could only dream.

The graphics, as I mentioned earlier, are simply stunning and are some of the best one is likely to find on a current-gen console. The environments are varied, taking the player through an Imperial shipyard, the junkyard planet Raxus Prime, and Felucia, which could best be described as a Dr. Seuss fever dream. The cinematics in between levels are also great to look at, and most Star Wars fans will likely find themselves re-watching them again and again.

Unfortunately, those same gamers will be less likely to revisit the actual levels in The Force Unleashed, as the gameplay is repetitive and sometimes horribly frustrating. Throughout the entire game, players will be fighting the game’s erratic camera just as much as they’re hacking away at the game’s legions of boring, unvaried enemies. End-level bosses spice things up a little bit, but when you wind up defeating them merely by throwing as many Force powers at them as possible, there’s little satisfaction. You won’t win through timing and strategy, since it’s almost purely luck.

Surely those Force powers make the game a little more fun, right? Sort of. In the first few levels of the game, it’s a joy to lift stormtroopers and drop them off ledges to their demise. And electrocuting AT-STs with Force lightning is always cool. However, for much of the game, the Force is just a standard weapon. Your character never seems all that more powerful than the game’s enemies, unless you’re playing on the easiest difficulty, and most gamers will resort to hacking away at baddies with their lightsaber instead of “unleashing the Force.” Kind of defeats the point of the game, don’t you think?

That frustration is multiplied a hundred-fold in the game’s much-maligned “Star Destroyer” sequence, which charges Starkiller with pulling a massive Imperial command ship out of the sky with the Force. Players must alternate between battling wave after wave of TIE Fighters and using both joysticks to bring the ship crashing to the ground. This sequence requires precise timing when eliminating the fighters—which is made even more difficult thanks to the game’s unreliable targeting system—and the joystick prompts that players must mimic are not entirely clear. In theory, it’s a simple, satisfying section of the game. But it’s so poorly executed that it makes an already average game that much harder to recommend.

The Force Unleashed is not a bad game; it’s just not as good as it could have and should have been. Star Wars fans should give it a play-through if only to experience a great story and visuals, but there are some serious issues with the gameplay mechanics. It’s a solid rental, but with the amount of hype surrounding this game, it should have been a must-buy.
Posted at 3:52 PM
Email ThisBlogThis!Share to TwitterShare to FacebookShare to Pinterest
Labels: Star Wars, Video Games, Wort Report Review