They’re Ready to Believe You! 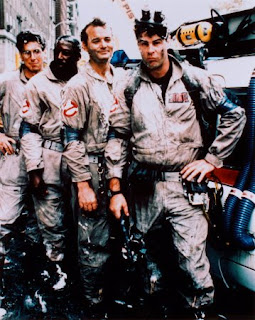 The long-rumored third installment in the Ghostbusters series may soon begin development. Variety reports that Sony Pictures has asked co-executive producers of NBC’s The Office Lee Eisenberg and Gene Stupnitsky to write a script that would reunite Harold Ramis, Bill Murray, Dan Aykroyd and Ernie Hudson for another round of paranormal investigating. The writing duo previously wrote the comedy Year One, which Ramis directed. As of this writing, Mr. Stay Puft’s involvement in the project remains a delicious, terrifying mystery.

Over the past few years, we’ve seen 80s icons Rocky Balboa, Rambo, Indiana Jones and John McClane return to the big screen, so why not Peter Venkman or Egon Spengler? With the original cast returning, a great story and some top-notch special effects, who wouldn't want to see this thing?

As for the next-gen Ghostbusters: The Video Game, sit tight. Film Junk reports that the anticipated title developed by Terminal Reality is currently without a publisher after Vivendi dropped it during its merger with Activision. Needless to say, the game will not be hitting shelves on its proposed Halloween 2008 release date. Will Activision hold off on the Ghostbusters game until the original film’s 25th anniversary in 2009?

Until further notice, there is no publisher…only Zuul.
Posted at 10:09 PM
Email ThisBlogThis!Share to TwitterShare to FacebookShare to Pinterest
Labels: Ghostbusters, Movies