Ghostbusters Game May Have a New Publisher! 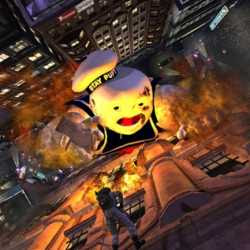 According to a tip sent in to gaming blog Kotaku, Ghostbusters star and writer Dan Aykroyd told Dallas radio station 105.3 KLLI on October 14 that the multiplatform Ghostbusters: The Video Game is about a “year away” from release. The game—which has been stuck in video game limbo since Activision Blizzard acquired all titles previously being published Sierra and Vivendi—is rumored to be released by Atari, although the company has yet to release an official confirmation. Mr. Aykroyd, to quote, well, you, "We're ready to believe you!"

Aykroyd continues to live and breathe the Ghostbusters franchise, so this rumor may hold water (or slime, in this case). The game’s Amazon.com page has it listed for a June 30, 2009 release date, which is fairly close to the 25th anniversary of the original film’s June 8 opening. That’s a golden money-making opportunity if I ever saw one.
Posted at 2:32 PM
Email ThisBlogThis!Share to TwitterShare to FacebookShare to Pinterest
Labels: Ghostbusters

Damn, that's a ways away. I remember seeing it advertised at Game Stop for a Fall 2008 release.