Cartman Gets His Ass Kicked 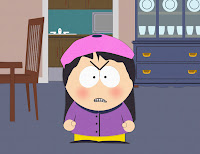 As a rule, cancer just isn’t funny. So when I learned that this week’s new episode of South Park was titled “Breast Cancer Show Ever,” I cringed just a little bit. Thankfully, there was a lot more to this episode than some off-color cancer humor.

When Cartman crudely interrupts Wendy’s presentation on breast cancer awareness, she vows to beat the hell out of him. Naturally, this gets all of their classmates amped to see the two face off after school while Cartman tries everything in his power to get out of fighting her, including intentionally getting detention by taking a crap on Mr. Garrison’s desk.

This episode was reminiscent of what South Park was in its early days. You won’t find much in the way of profound hidden meaning or layered political messaging in this fairly straightforward episode, but you will see Wendy beat the snot out of Cartman at its finale, something that he’s really had coming for the past few years. This wasn’t a great episode—the plot wore a bit thin halfway through—but there were plenty of great Cartman moments throughout, and it was nice to see Wendy featured so prominently. However, even an average episode of South Park is better than most comedies on television.

Head over to SouthParkStudios.com to watch this episode in its entirety.
Posted at 3:28 PM
Email ThisBlogThis!Share to TwitterShare to FacebookShare to Pinterest
Labels: South Park, TV

what do you mean by it wasn't a great episode, Cartman got his ass kicked by a girl!!! He had it commin'