Okay, I admit it. As a critical, long-time Star Wars fanatic, I find myself enjoying the computer-animated Star Wars: The Clone Wars series on Cartoon Network. While it may be kid-friendly—as Star Wars always has been and should be—it has a lot of that “gee whiz” Star Wars magic that was sorely missing from the prequel films, which should delight older fans of the saga.

That said, I thought the Clone Wars film released theatrically in August of this year was pretty terrible—kids’ movie or not. The plot wasn’t all that engaging (rescuing Jabba the Hutt’s son?) and a movie theater screen was not the proper place to introduce the series’ puppet-like stylized animation, which bears more aesthetic similarities to Thunderbirds than Pixar's award-winning and more realistic work. 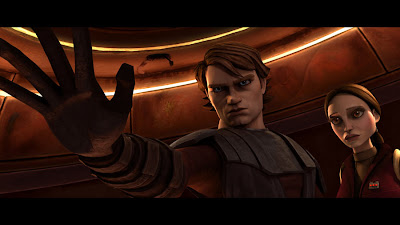 After three weeks and four installments, The Clone Wars shows tremendous promise. The October 17 episode in particular, “Destroy Malevolence,” was pure, unadulterated old-school Star Wars fun. Topping off a three-part story arc, the episode followed Anakin Skywalker, Ob-Wan Kenobi and Padmé Amidala as they infiltrate the villainous General Grievous’ super-powered warship (the Malevolence) and, as the title suggests, destroy it. There are shades of A New Hope throughout the episode as our heroes race through corridors dodging blaster fire, and, surprisingly, there is actual chemistry between Anakin and Padmé in this series. Star Wars fans have been waiting nearly ten years to see what that actually looks like.

Star Wars die-hards—myself included—were quick to pounce on series supervising director Dave Filoni’s animated take on George Lucas’ universe early on, but it’s clearly found an audience and seems likely to sustain it. Variety reports that the one-hour series premiere on October 3 pulled in 3.96 million viewers—a record-breaking number for a Cartoon Network series. I’ll refrain from saying that the Force is strong with The Clone Wars, but it’s clearly far better than most feared, and looks to introduce an entire new audience to these characters and stories. And who can honestly argue with that?
Posted at 4:25 PM
Email ThisBlogThis!Share to TwitterShare to FacebookShare to Pinterest
Labels: Star Wars, TV